You are using an out of date browser. It may not display this or other websites correctly.
You should upgrade or use an alternative browser.
A

Hi guys, thought i should start a thread about the new engine i'm building for my Cressida (yeah yeah, its not a supra, but close enough!)
For those that dont know, 7m's are kinda my thing, GE's in particular. I'm not really into turbos.
What i do like is a nice responsive high rpm NA screamer, which built properly the 7m-ge is quite good at.
The motor will be run on dedicated LPG (Propane) which is great as the 110RON out of the bowser means you can run silly compression and it loves ignition timing. Not to mention it is cheap as chips here in Australia and allows a lot of the EFI crap to be deleted from the engine.

Let's start with the head. Last year i bought a big new milling machine which i converted to CNC, and i wanted to CNC port a 7m head. There was so much f'ing work in coding this up, and a lot of machine time for the actual porting!
Being only a 3 axis CNC i cant get absolutely everywhere in the ports, but i was able to work on the important bits, being the valve bowls and combustion chambers. Still, being CNC it has one very distinct advantage in that each port/bowl/chamber is exactly the same as the next. Also it beats the hell out of spending 40 hours with your die grinder....
All the machining work was done concentric to each valve seat (or port)

The intake ports were left alone past the bowls as they are already too big, however the exhausts were opened up by 1mm at the port exit to maintain a reversion dam, and this bigger diameter was carried back to where the 2 valves join into 1 port which according to my cross sectioning was the most restricted part of the exhaust port.

While we're on the exhaust side, remember that pesky EGR hole in the #6 exhaust port, normally blanked off by a plate on the rear of the head in ADM cars... well that's gone now.

as in completely gone, i press fit a plug in the hole before milling out the port and the extra bits of plug were cut away with the rest of the port....

The chambers were actually left with the standard cloverleaf shape to maintain squish, but the shrouding around the valves was heavily cut back. I did a 3 angle valve job and the 3rd angle then leads into a large radius into the chamber. The radius is in fact the same as the valve radius so in theory maximising the flow without removing more meat than necessary (cant loose to much comression!)

So here is the original chamber, complete with valve shrouding. at low lift in particular they are quite restricted, with max lift not a lot better TBH

New chambers and bowls. The seats were bored out 2mm and again there are some funky radii going on in the bowl. The valve guides were also milled with an aerofoil shape on the inlet to split air around the valve stem, and create a low pressure point behind it which is otherwise a dead area of the port. a simple chamfer is enough on the exhaust.

An idea of the various curves and arcs involved in the valve bowl toolpath. No CAM, the code was all written in MS Excel

I did some other work while the head was up on the CNC as well.

Firstly the water galleries -usual missing #6 coolant drain was added, but i have also tried to address the airlocks inside the head by milling out the pockets so that the air cannot get trapped in this area.


I have also added ARP insert washers to go under the head studs. These press fit into the head and the idea is to stop the head bolt hole caving in around the stud and allowing the head to lift. More an issue on soft heads but still good insurance even on a rock hard head like this one.

Milling out the press fit

I had a lot of time staring at the head while it was on the CNC so i got bored and chased every thread in the damn thing (except spark plugs, still need to buy a tap) which is really nice when assembling stuff, all bolts go in by hand then just need half a turn with a spanner and they are tight.


Head all machined and ready to assemble

Installing valves, and heavy duty springs. Took this all apart again as i have changed over from OEM 2jz valves to Ferrea stainless 7m ones in 1mm OS

Still need to reassemble with the new valves and set lash, but the head is mostly complete. Ive got some 280* x 8.5mm cams to go in it, adjustable gears, shim under bucket conversion and some other goodies.

Oh, i also milled a good chunk (ie >2mm) off the head chasing moar compression, probably unnecessary now with the pistons im going to use, but oh well at least it will run on diesel if need be
A

My new cam covers are still a long way from finished, but you get the idea. I only just test fitted it on the head properly for the first time today! They were designed to be as slim as possible and also NO LEAKS. No rubber gaskets to get squished "just right", no juggling the torque on bolts ~300mm apart to not bow the covers but still get a seal, these are studded through each cam cap and when it all bottoms out there will be a .5mm gap off the head for FIPG. Do the nuts up, wait for the FIPG to dry and never worry about it again

They are basically only just tall enough to clear the front cam cap/cam seal and are relieved underneath to clear the cam lobes.
Why lumpy cam covers? Because lumpy cams!

I need to get some shorter studs as they look a bit funny atm, but they are noticeably slimmer than stock

Today was a nice day to be working out in the sun so i final washed the block, gave it a quick lick of paint and dragged it inside into the engine building room. Also drilled/plugged it for front sump and plugged the main oil gallery between the pump and filter which i wont be using anymore.
block was bored & honed to 1mm OS while "stressed" with torque plate, main caps etc and surfaced with the minimum amount off to get a good seal around the bores (0.011")

After going to a turbo I've never understood why the average guy would spend a bunch of money to build up a NA. However, clearly you are not the average guy haha. Nice work. It will be cool to see how this all comes out for sure. Good luck!

Neat to see all the machine work. Keep the pics and info coming!

Sent from my XT1060 using Tapatalk

I want to hear this thing when it's done. More pics!
A

Will you be building a crank girdle for the mains as well? Use billet mains and extended main studs that tie into the girdle to keep the 7m crank from being a wet noodle at the RPMs this thing might see.

Also, you can do like IJ did and use an electric water pump with the 7mge water pump to keep cavitation from happening at high RPMs.

idk.. best word I could use?

This is awsome job!

Really nice work on the head.. I did some similar mods (except port job):
- Quake's mod: ARP insert washers (pending, need the correct drill bit and tool, the machine shop ask really too much to do that with CNC)
- EGR gallery plug

My headwork is not comparable to your, which is soooo clean !

And I thought I did a crazy 7M head. I guess I gotta step it up next time. 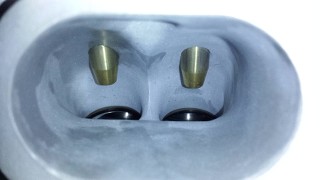 I love the machine work you've done. This thing is gonna turn out awesome. You obviously have been doing this for a while.

Can't wait to see how this pans out. Some really impressive fab skills going on here.
I hope a set of ITBs make their way onto this. Guess I'll have to wait and see.
A

Thanks for the comments guys.

No crank girdle for this one. Ive never had the crank become a "wet noodle" before, you keep the bearing clearances tight and lots of oil up to it and the engine will feel as smooth at 8000rpm as it does at idle. Main bearings arent something you see a lot of fail in these things. B/E's sure, but not mains.
This motor has ARP main studs as an upgrade, i normally just run OEM bolts in an NA motor.
The engine this one is replacing turns past 8000rpm on a "stock" bottom end with ARP rod bolts and some oiling upgrades. I actually built this CNC head to go on that motor, but it didnt quite fit so here i am building a new bottom end for it as well.


I have an electric water pump here, but not for this engine. Im saving that for the dry sumped/destroked race motor that i hope to one day finish.
The genuine water pumps have a steel impellor which seems much more resilient to cavitation than the aftermarket cast ones.

7M4EVR -Sure, NA vs turbo is never going to stack up in $/kw, but going fast isnt all about peak horsepower...
A

Oops, missed a couple of replies!

Rollus, might i suggest you measure all the insert washers with a micrometer and order them by size before you start. i found the press fit section had a pretty wide tolerance, so i graded them by size before i started which makes it easy to maintain a good fit.


Negativegeforce i was looking at your build thread, very impressive! Will be taking some pointers for the 1000rwhp GTE i am building for a customer of mine
I built my first 7m 10 years ago, i was just musing yesterday how many have been on that engine stand since... ive literally lost count!
Ive only been in the machining game for a few years, but i really enjoy it. I run a small aftermarket parts business, Technico Racing, where i make shiny billet stuff, mainly for Toyotas. Most of the custom parts going to this build are or will be available on the website once i get time to update it.


Absolutespeed, no ITB's just yet. Maybe one day, with liquid propane injection. I do have a new manifold and throttle setup to go on this, but it's probably not what you're expecting...