Alright guys and gals, it begins. Actually it has begun some time ago, but I am just now to the point where I have enough photos and progress to make a somewhat interesting post. I am going to try and keep it breif and entertaining.

First, here is the car: 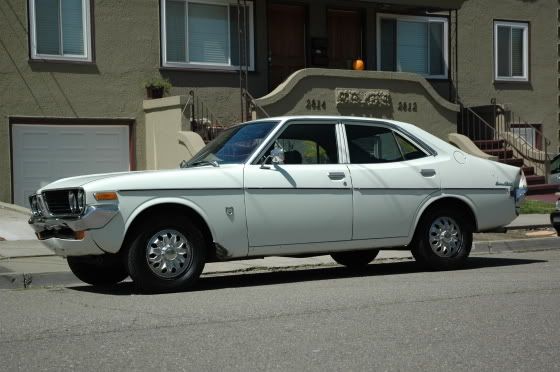 Its a 1972 Toyota Corona Mark II. MX12 chassis. Under the hood is a 2M straight six. 2.3L and carburated, it was rated at 120 something HP. It ran great and had ok power, reved nice and smooth. Horrible gas mileage though. That and the engine didn't seem to want it's oil in the crankcase, but prefered it on the pavement. Not only that but the engine was smoking like crazy. Bad valve seals I think. No matter. A replacement engine should fix all that. After some research I decided the 7M would be a viable swap. Meaning that I would be able to handle it myself. So a donor car was found: 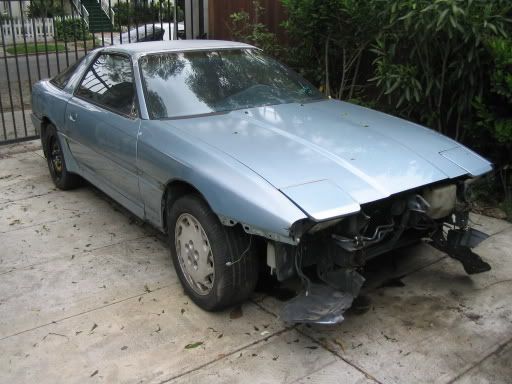 One 1989 Supra N/A auto delivered to my brother's driveway. Not in great shape, but the guy assured me it ran. Plus, there was a W58, manual driveshaft, flywheel and clutch slave thrown in the back as part of the deal. 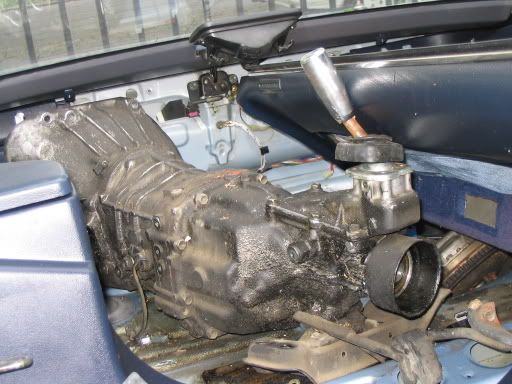 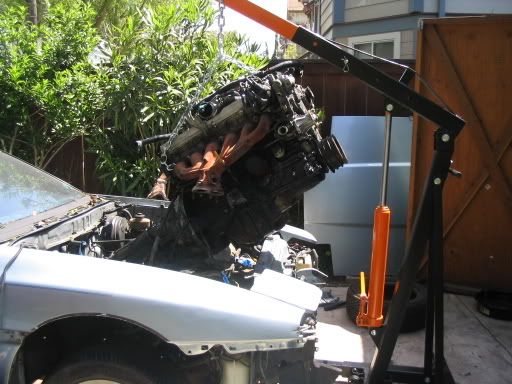 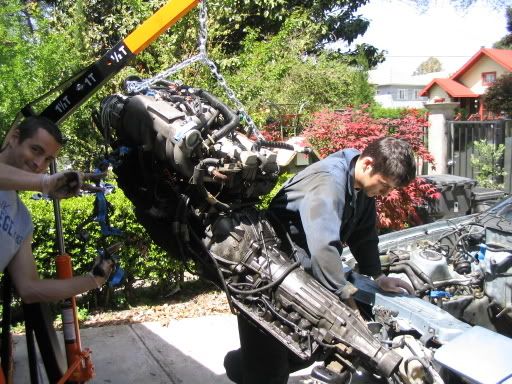 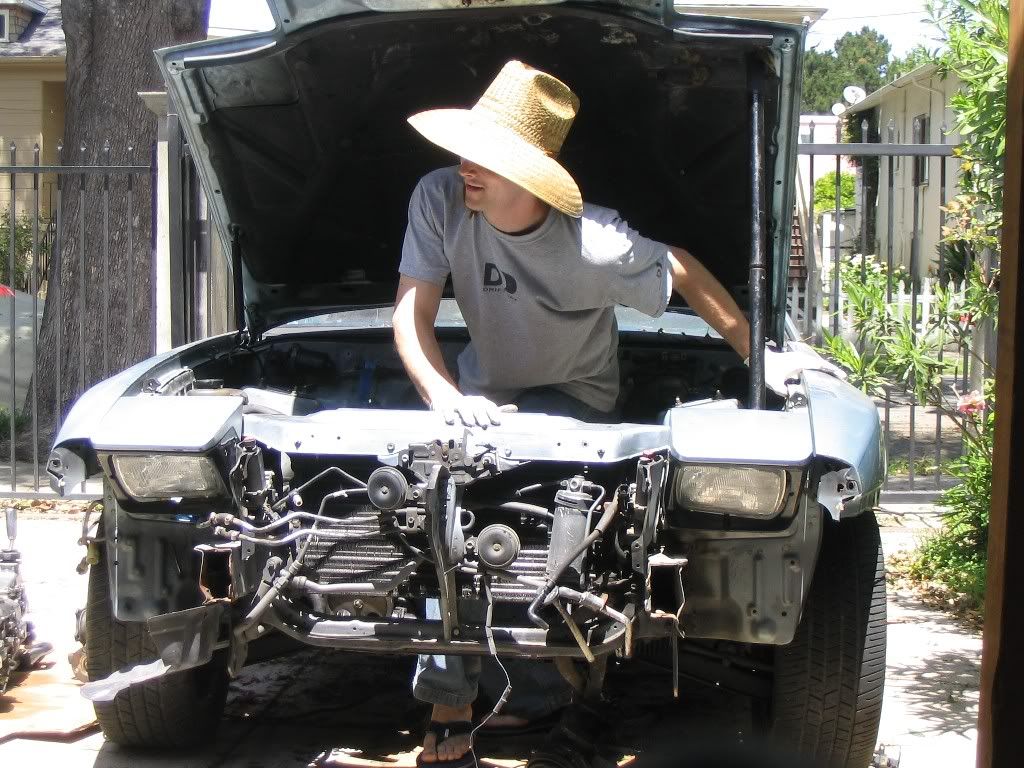 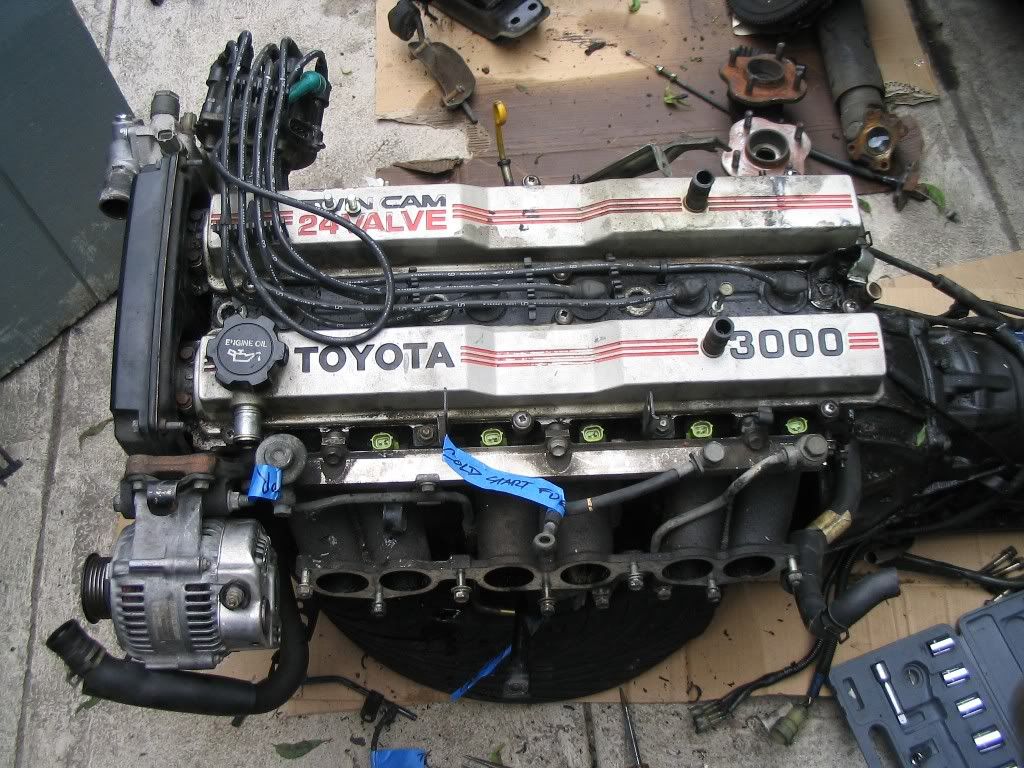 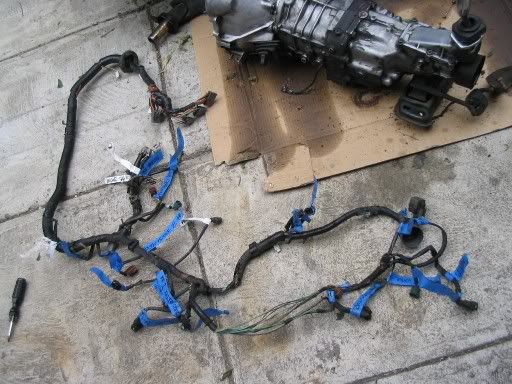 Cleaning parts. I went through so many shop towels, wire brushes, and degreaser it is amazing. But I like clean engines better than I like dirty engines so it was worth it. 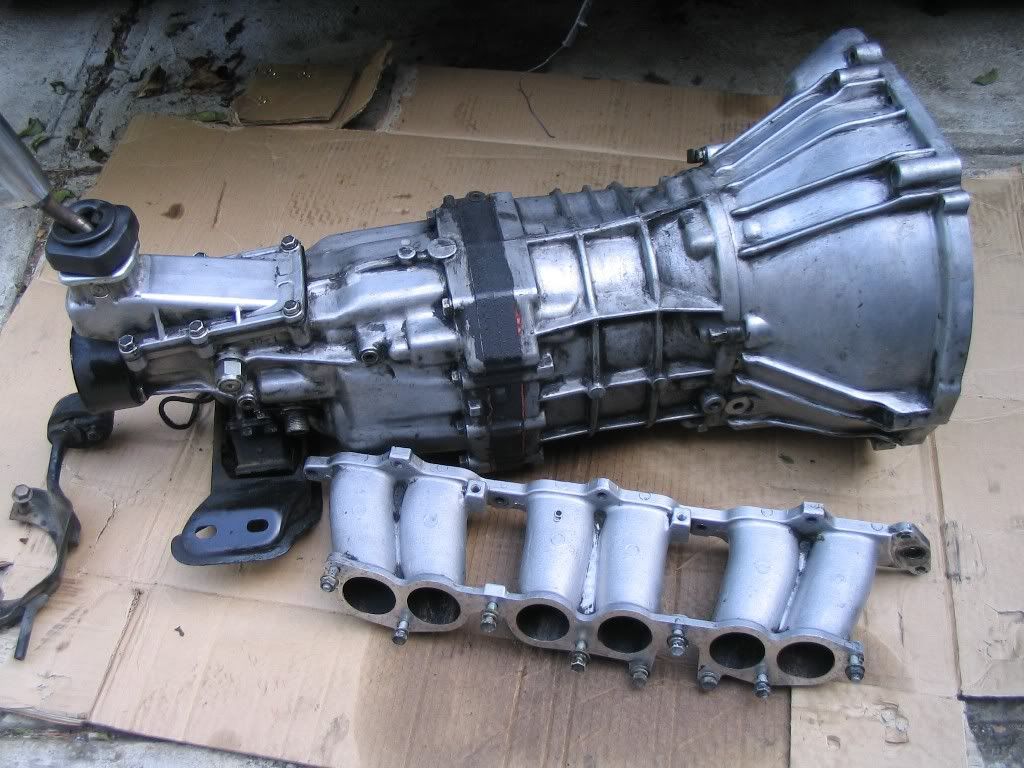 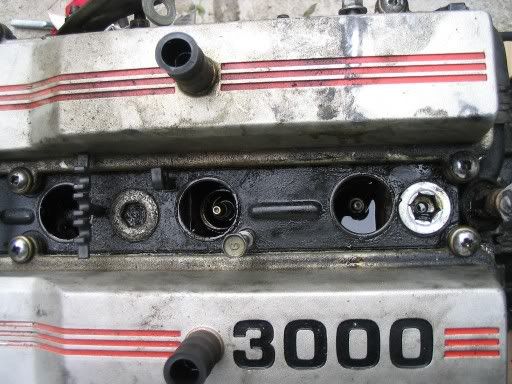 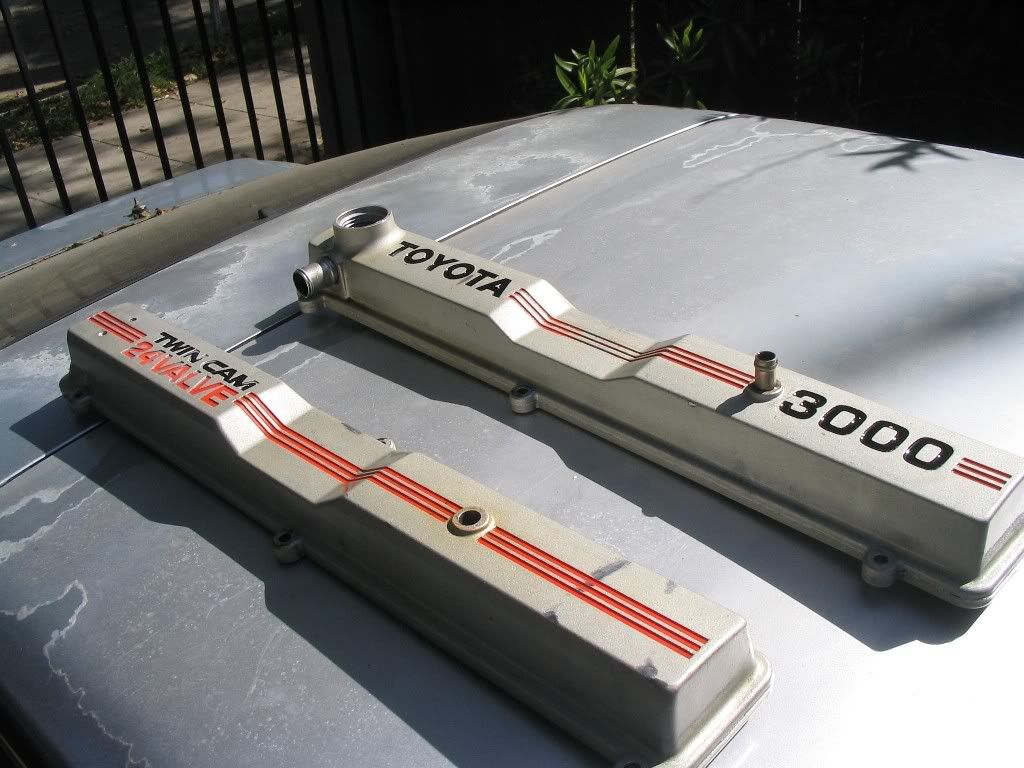 Because I don't have to smog this car, I am ditching all the smog stuff. Simpler, and it looks better. Trying to clean up the intake manifold I cut the vacume ports and throttle body coolant line fittings off. I also traced the outlines of the EGR gismo to make block off plates. The metal is the bottom from a Radio Shack project box I had laying around. Not very pretty, but it works. No one will really be able to see it anyway. Also, I used those allen bolt plugs you can get at auto parts stores to plug the hole in the water neck where a VSV was and a now-unused port on the intake mani. 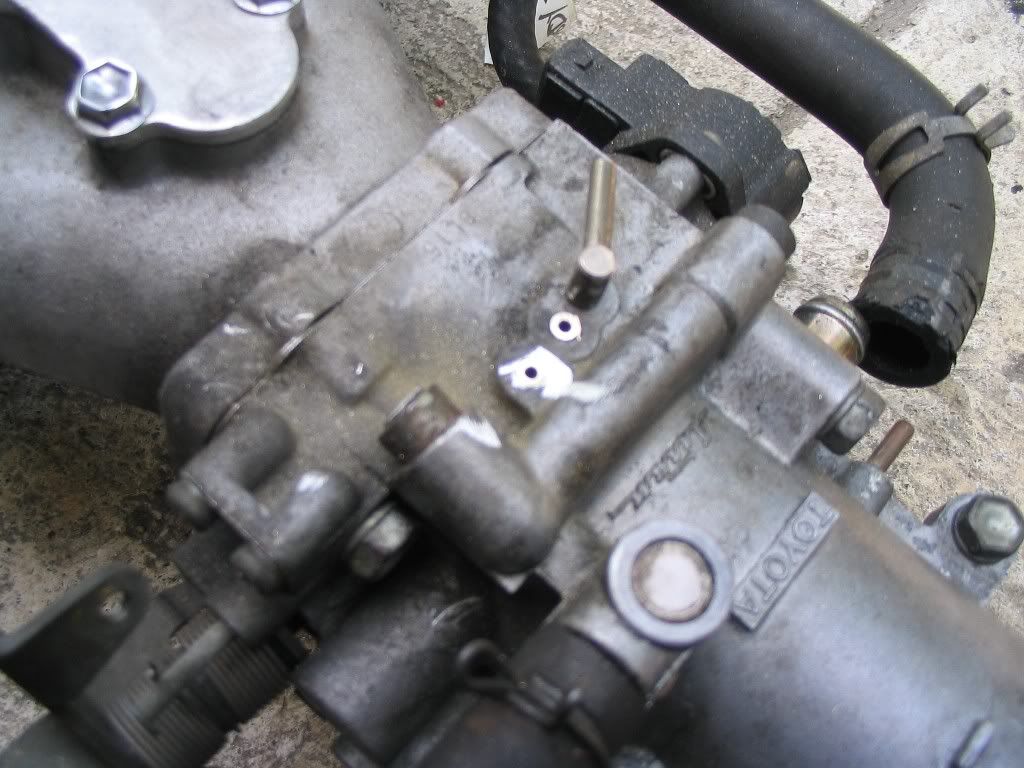 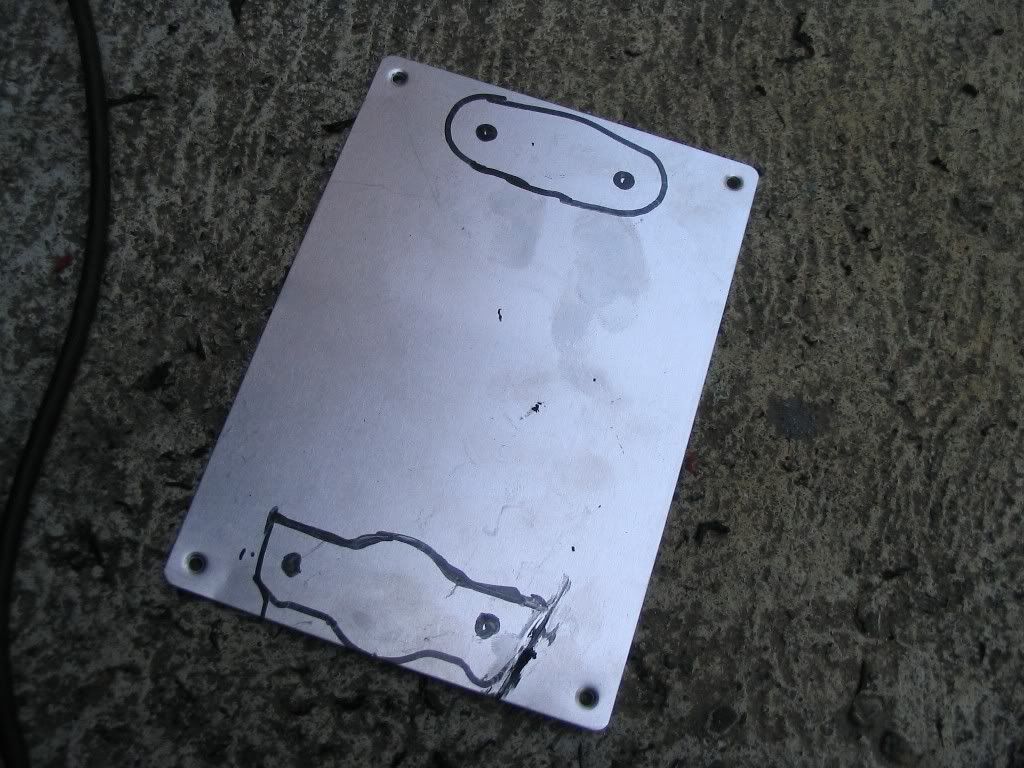 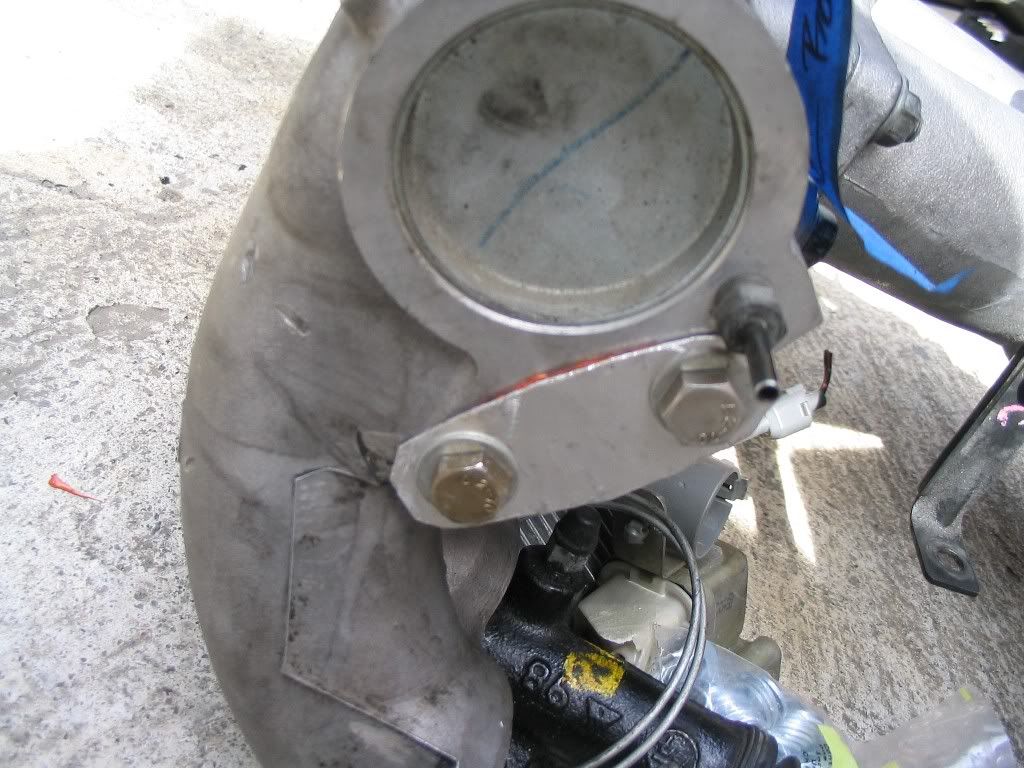 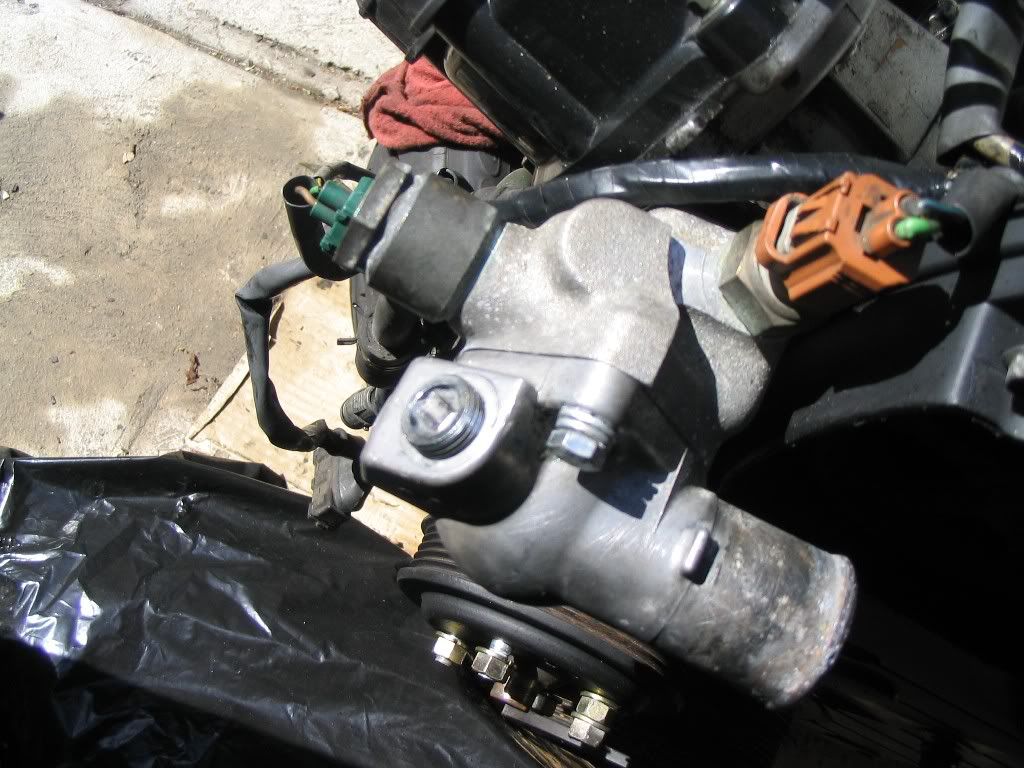 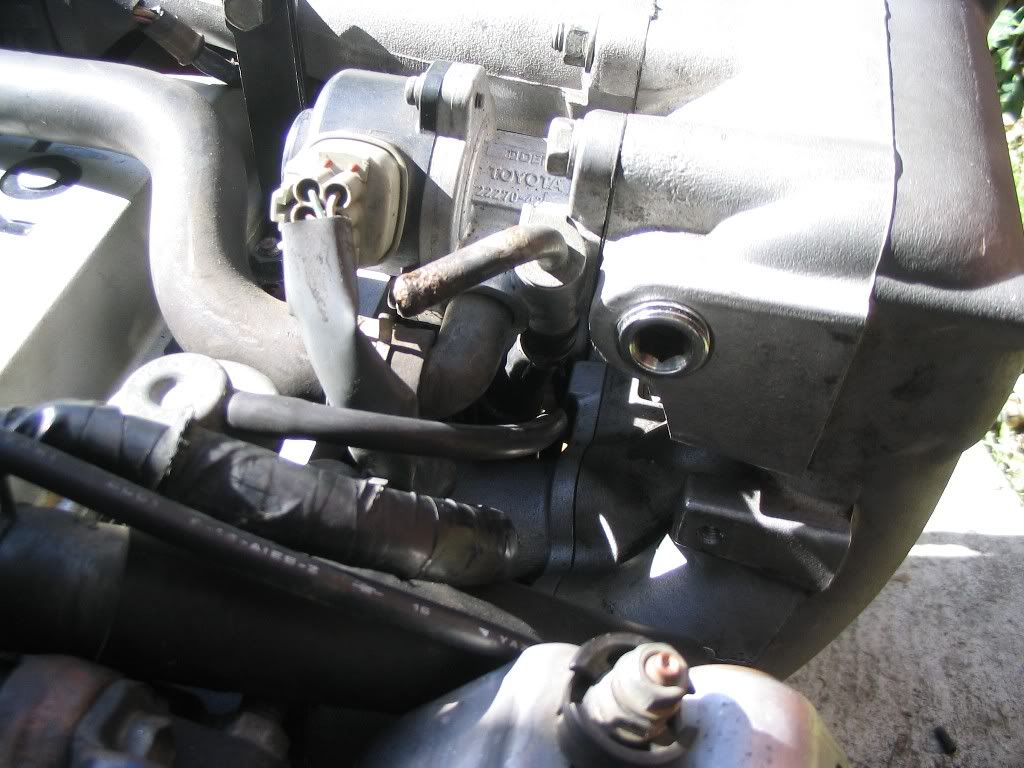 Some Pacepooper headers came in, and I had to hacksaw the flange to get them to fit. I think the flange was drilled wrong, otherwise it would have been fine. Also, the rice boy in me loves the look of exposed cam gears. I think that the headers and visable gears combined will help give it a hot rod look that I am going for. 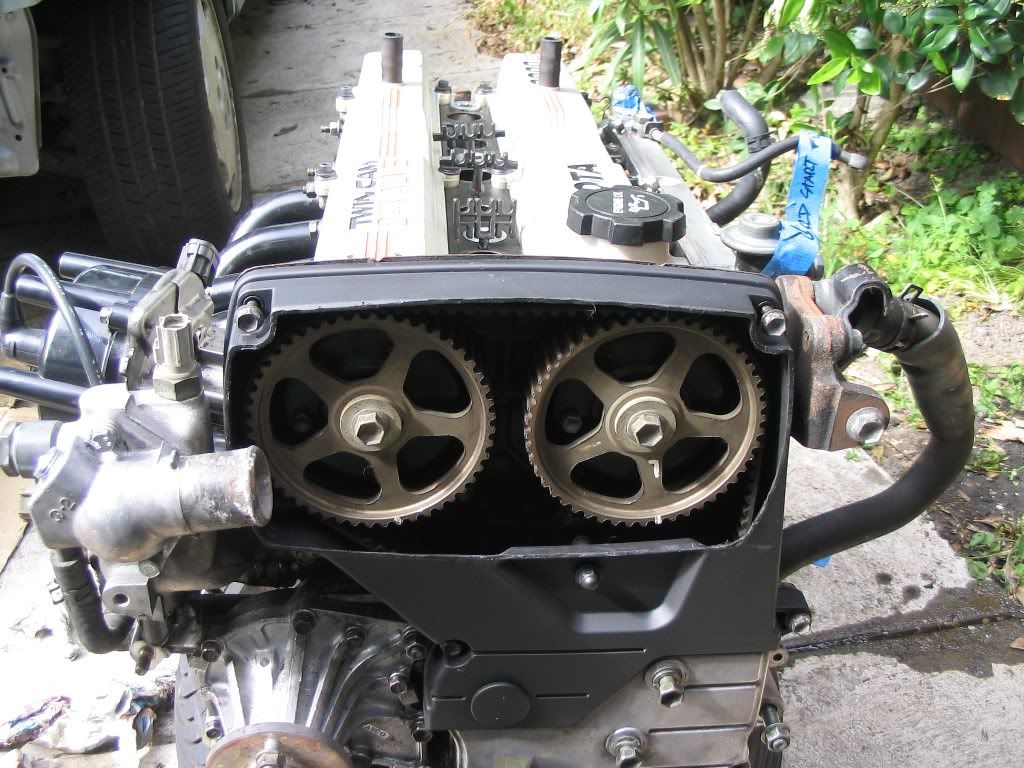 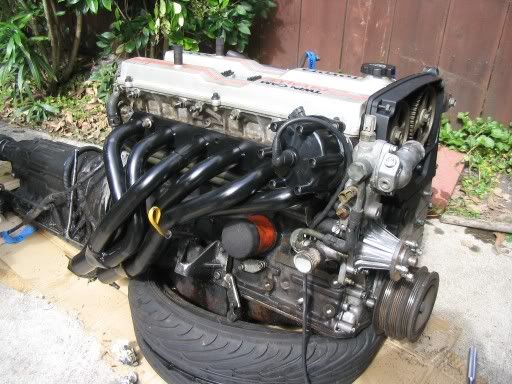 Awesome! I wish i had a Corona!

Things starting to come together. The engine is just about ready. I still don't know if I will be able to use the oil pan and pick up off the 2M. Just have to wait and see. 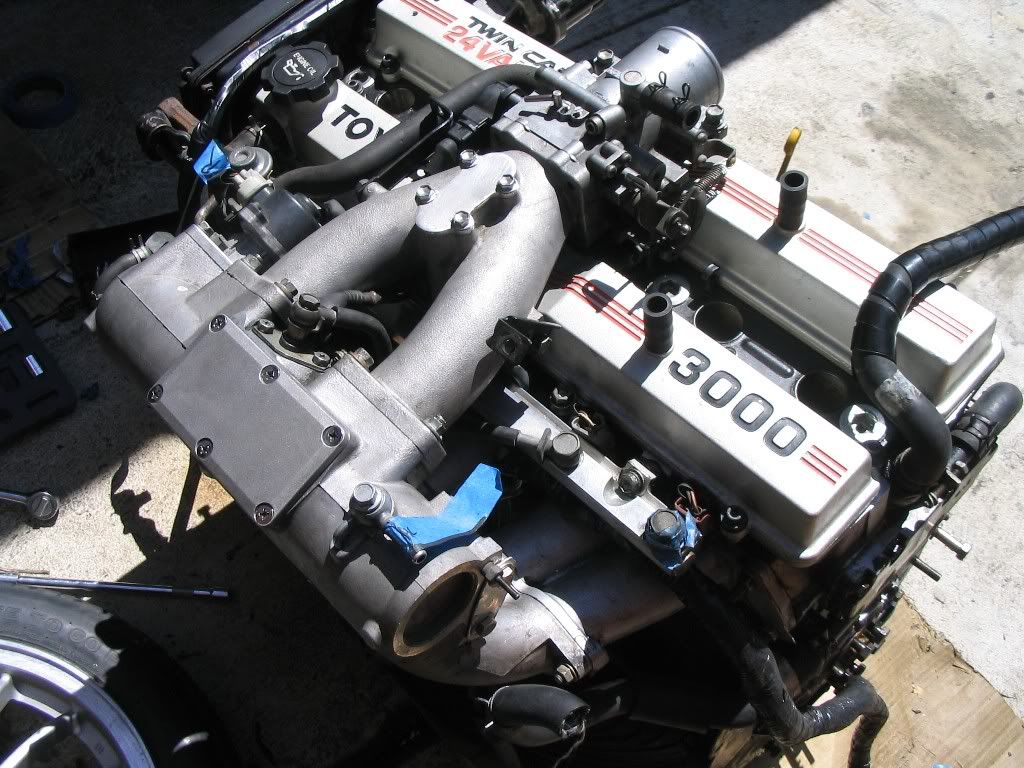 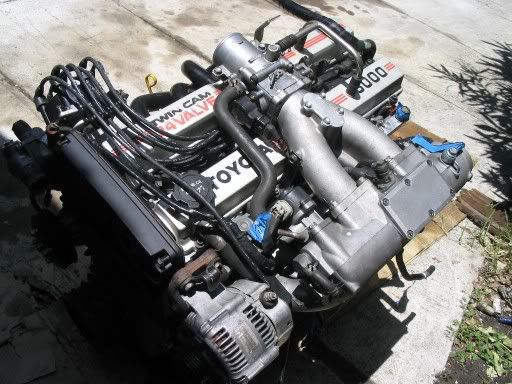 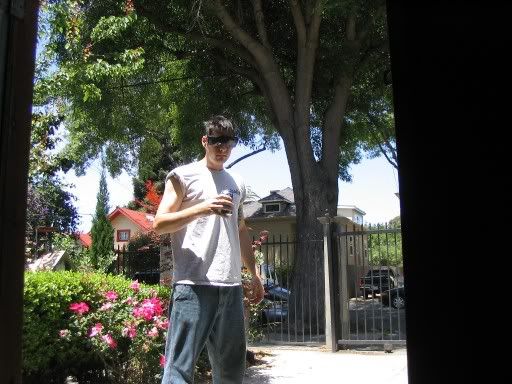 MKII in the garage and we are about to start! 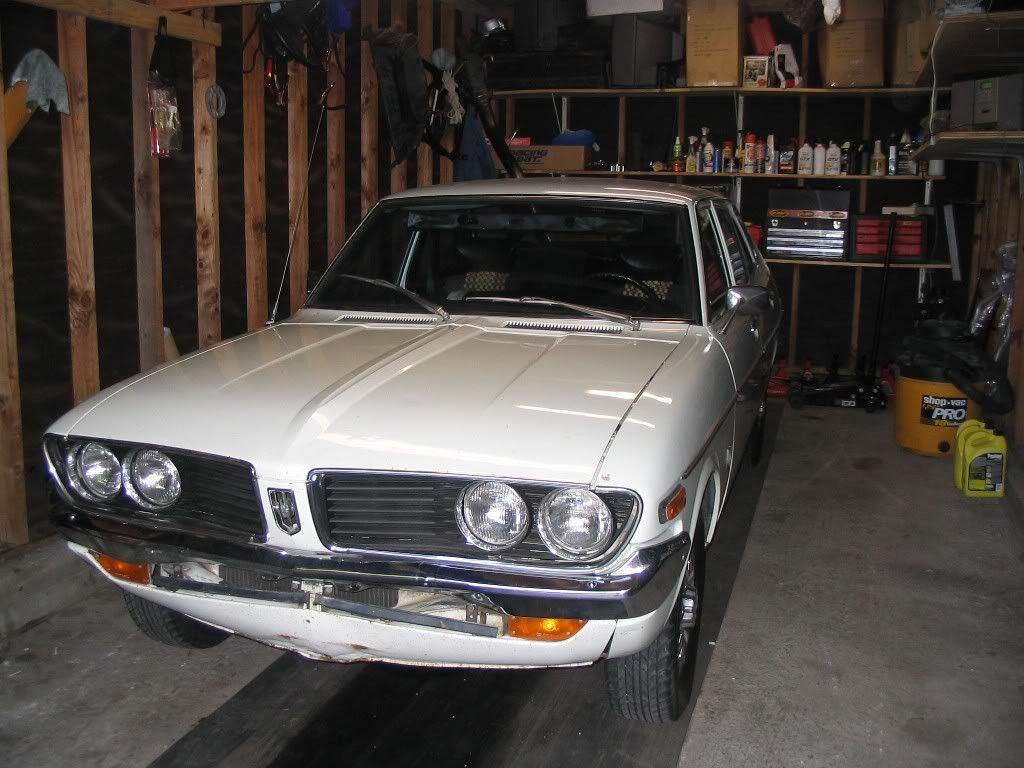 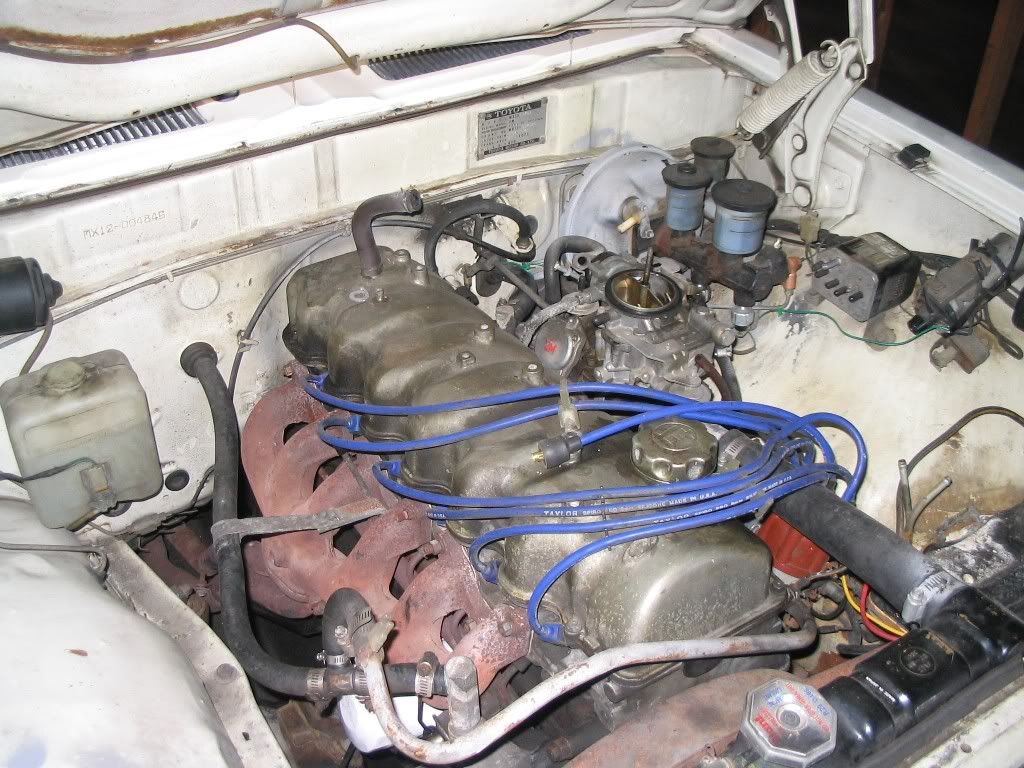 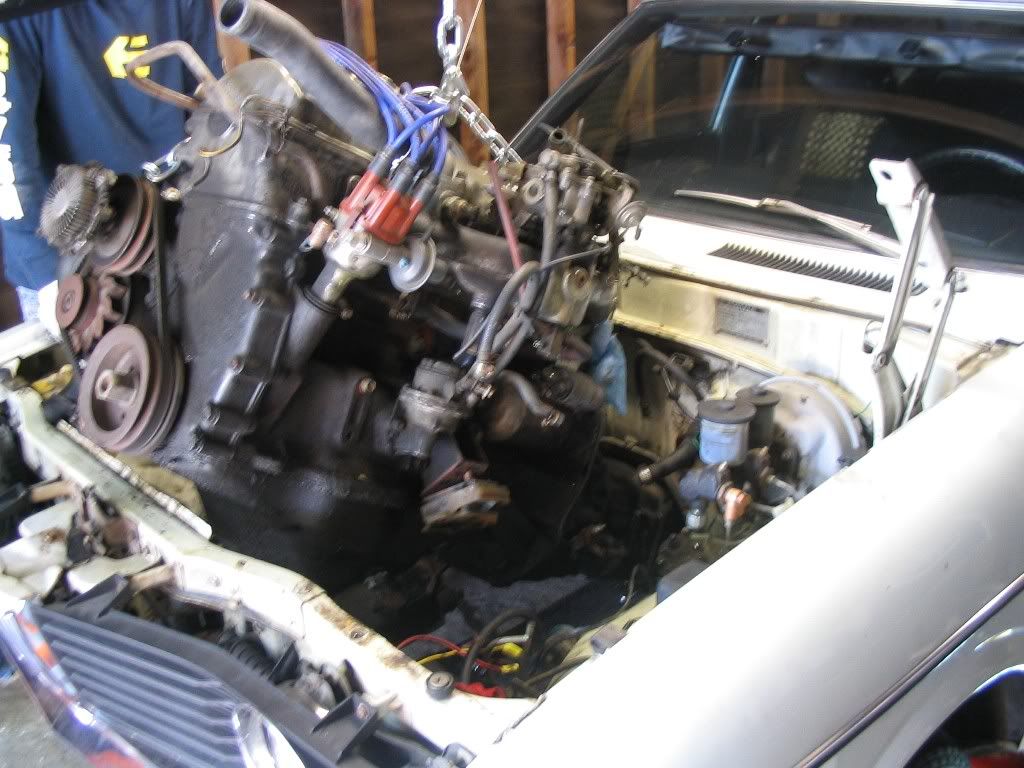 What a mess. The engine kept barfing coolant. A fuel line kept siphioning gas. And oil oil oil everywhere as usual. Some minor frustrations getting the engine out was showing on my brother and I's faces. 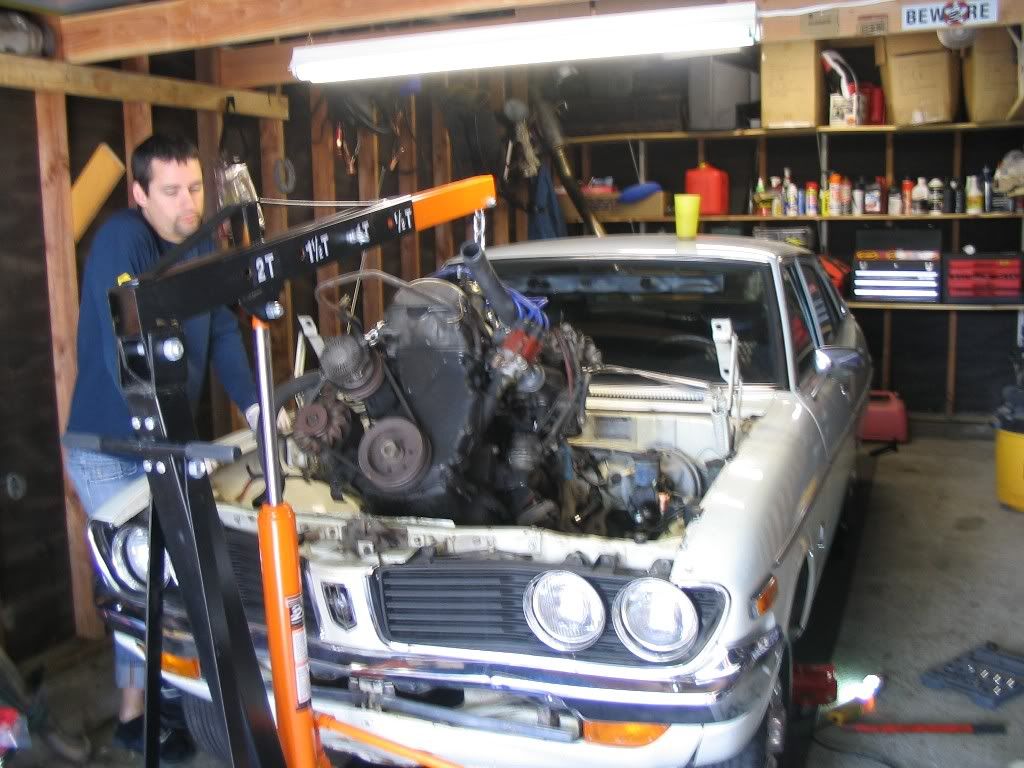 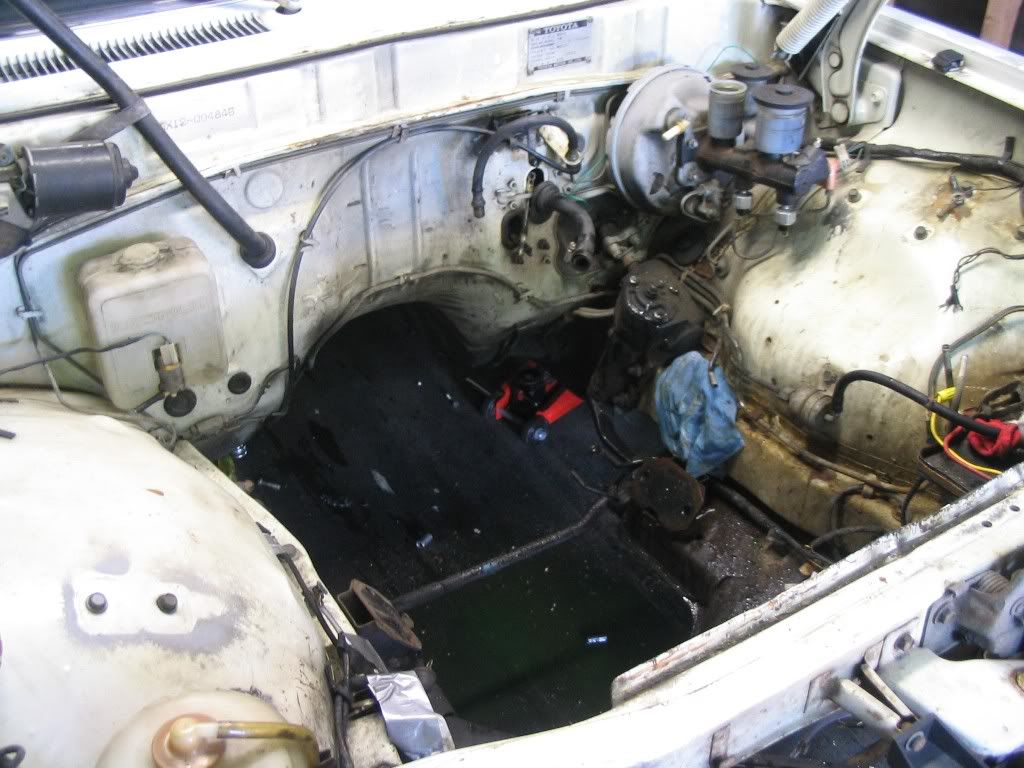 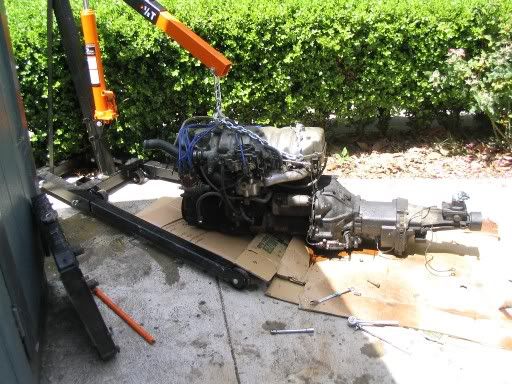 Thats the progress so far. Its been fun, but it hasn't even gotten difficult yet. Figuring out the oil pan that needs to clear the crossmember in the front, and the steering rack in the rear will be interesting. With any luck the 2M pan will bolt up to the 7M crankcase. 2M motor mounts should work, if not some combination of 2M and 7M will. After all that.....I still need to get it to run :1zhelp: hahahah

I don't doubt that the 2M oil pan will fit the 7M block.
However, you may want to look into getting a 7M pan from a Cressida and oil pump to go with it. Cressy's are rear sump, let's just hope the sump is small enough to fit in the space provided by the Corona's bay.

supra90turbo said:
I don't doubt that the 2M oil pan will fit the 7M block.
However, you may want to look into getting a 7M pan from a Cressida and oil pump to go with it. Cressy's are rear sump, let's just hope the sump is small enough to fit in the space provided by the Corona's bay.

Thats interesting...I thought the cressys where front sump? But yeah, thanks for the advice. If the 2M pan didn't fit, I was going to use a 7M pan, oil pump, and pickup from a Cressida. Dunno yet really. Just going to have to take stuff apart and see what works.

Thanks for all the compliments guys! This is a really fun project so far.


And this just in!! My wheels arrived today!! My brother just sent photos ( I am at work ) 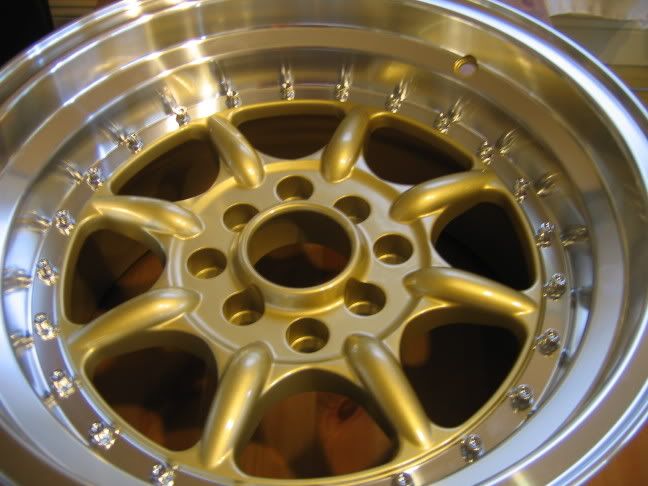 The specs are 15x8 zero offset. As soon as I do a test fit with tires I will know how much I can lower it. Going to go for a "nice" drop. Not too slammed, but defininatly low.
I

I come from a land down under

We got the sporty version here that had 160hp and back in the day they were a bit of a rocket so with 200 and torque it's going to be a blast!

One of the guys here has a 2JZ in one!

are those sportmax wheels?

Oh yeah, Gianttomato over on Toymods right? Yeah that guy is really nice and has some nutter Coronas! 2JZ ITB maddness. He gave me some great advice about my project. The 2 door version you guys got in AU is really sexy.
Do you guys actually say "down under" or is that a stereo type?

supra90turbo said:
are those sportmax wheels?
Click to expand...

Yeah those are sportmax....I am a little embarassed to be rocking the ebay wheels. But I do like the style. Plus these gold ones where a limited run of only 10 sets.

Don't worry about the oil pan mix up. I am sure you have forgoten more about the 7M than I will ever know! :biglaugh:
I

I come from a land down under

BosoMKII said:
Oh yeah, Gianttomato over on Toymods right? Yeah that guy is really nice and has some nutter Coronas! 2JZ ITB maddness. He gave me some great advice about my project. The 2 door version you guys got in AU is really sexy.
Do you guys actually say "down under" or is that a stereo type?
Click to expand...

LOL it's a bit of a stereotype thing!
(no we don't say it)

Dave (Giant Tomato) Is a really nice guy he came over here early on in the development of Fatty to check progress and to say hi!

I love his Crown Wagon!

BosoMKII said:
Yeah those are sportmax....I am a little embarassed to be rocking the ebay wheels. But I do like the style. Plus these gold ones where a limited run of only 10 sets.

Don't worry about the oil pan mix up. I am sure you have forgoten more about the 7M than I will ever know! :biglaugh:
Click to expand...

I wouldn't be ashamed at all of those wheels. Sometimes it's just not feasible to buy the true JDM old school wheel due to lack of circulation, discontinued, and they wouldn't look half as good as these do, since they're new!
That said, I'd run sportmax wheels on my supra no problems.... because, chances are the only person who will say anything is the guy driving the Hyundai Elantra, and he can fuck off.

I doubt I've forgotten more than you know..... yet.

Seriously! I was looking at some Work Equip 01 and Equip 03s.....looking at about 1600 shipped. I find some nice SSR MKIIs ( fitting, no? ) on yahoo auctions .JP and they go for LOTS of money.

So yeah. Buget wheels for me! Thanks for that sledgehammer of a + hahahah

1J: So I guess you guys don't ride kangaroos to work either? J/K stupid joke.
According to my resarch, Austraila is the coolest place in the world. I really seriously want to go there some time. I am a bit of a wine enthusiast, and Australia makes some top notch stuff.

Any updates dood! I wanna see her in person when shes done... O town isnt a far drive...

That is the chassis before mine, and came with a 4 cyl. 18RG swap? 22R swap? Those would be fun. There are a lot of hot rod parts for the 22R actually.

I will be working on the car today and tomorrow, so hopefully I will have at least a few more photos of progress.

Just to keep you guys entertained, here is the photochop that is my avatar:

I asked the guy who made the front lip on my Nissan 240sx if he would be willing to make some custom one-off stuff for my Corona. He really liked the idea and offered to "sponsor" me. I didn't ask what he ment by that, I am guessing me only paying for materials and then sporting stickers on my car ( No, sorry. No stickers on the Corona ) He asked me to send him some photos of what I was looking for and then he photochopped some stuff onto a photo of my car. I still don't know if I will do fender flares. I don't think I will have to. So the front air dam will be the main deal.

HellsLegion, we should have a NorCal meet for Supras, Cressidas, and whatever. See the Corona then! I think that would be fun.

Oh wow that is sweet! That wouldnt happen to be your craigslist listing would it? I wonder what it means by with no wheels. like stock ones. Hmmmm.

No not mine. I just found it this morning. The guy knows those wheels are worth money, so he is probably selling them seperatly or on the car for more $$.
It could be a pretty sweet car. Rust is the big issue when looking at old Japanese cars.

Looks nice and all but just from one pic it looks like the hood is all bumped up. unless it just isnt sitting right. Ill wait till I find a really nice one. Or just buy my 86.5 supra...