plaaya69 said:
It would be nice if that DM piece was shown more in the open but none the less it's a nice touch. Also that paint is looking shiny and good job on the prep with the disassembly of everything so it is done right.
Click to expand...

Yeah it's a shame that it's hidden in the tunnel. Thanks!

Lots of reassembly, finally. Under the hood... 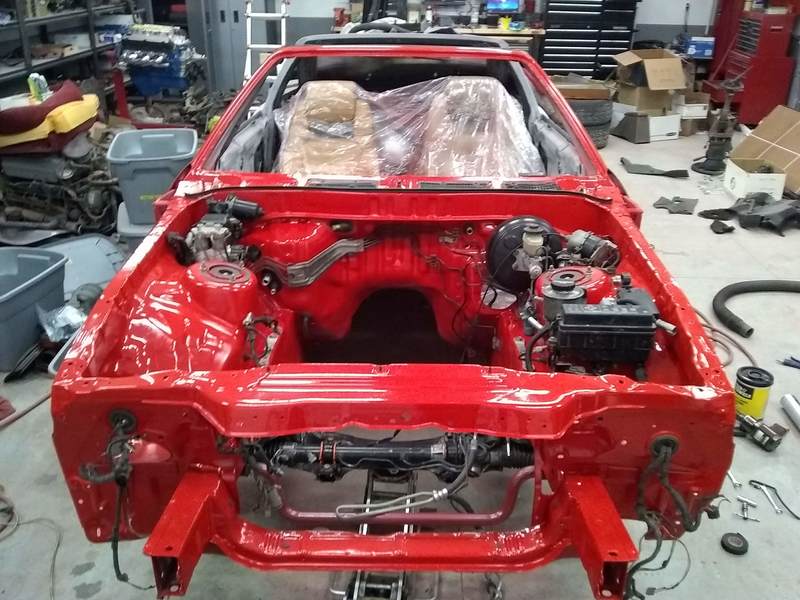 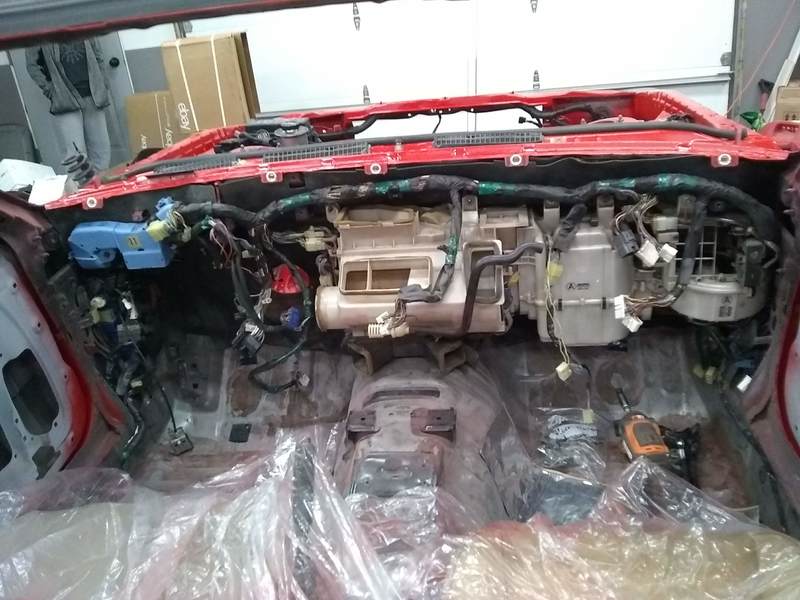 I also got brake and ABS lines hooked up in the wheel wells.

Next steps:
That's probably about it until after our move. I'd like to get the doors jambed and guts installed but I don't know that time will permit. I should probably do that first if I am going to, so that I don't have to re-cover everything due to overspray. But schedule is tight and I have another vehicle to finish also.
Last edited: Feb 28, 2022

Yes, but my setup isn't anything too special. I think I've described it earlier in the thread. I have a 60 gallon air compressor and a Harbor Freight HVLP gun set. I used the small detail/touch-up gun for the bay as I wanted more control over a large fan-out. Though I wish I did, I don't have any sort of booth setup. My strategy has just been to move everything far enough away and cover things I don't want to get overspray on with drop cloths. I still have a red mess to deal with. When it comes time to paint the outside panels, I plan to find a booth. Especially with this single stage paint, it's particularly bright and tenacious - base/clear is usually a bit less of a mess.


3p141592654 said:
thanks, I was thinking it might be in the thread somewhere. Yeah, I was wondering if you had some sort of booth or canopy setup. Of course I cannot see any dust from an internet picture, but your results seem very nice.
Click to expand...

No trouble with dust nibs in the paint this go-around, just red dust everywhere in the shop. I'm pretty pleased with the Kirker paint, at least so far. I used SPI clear on the Tacoma and it came out pretty nice too, but it did have quite a few nibs and will need to be sanded out to be perfect.


quickstudy said:
Damn nice resto work. I have to know: how do you paint in your garage without making a mess everywhere?
Click to expand...

Well... you don't. But I use drop cloths to keep it off of anything critical. I do still have a layer of red dust on everything in the shop now.

Got everything under the dash installed as well as the dash itself. It'll have to come back out as I'll be painting it black but I don't have time any more for "since I have it apart I may as well...". That is what got me into a now 13-year car project that has barely been touched for the last 7. So right now the focus is to get it back on the road as quickly as possible and work out some other details later. 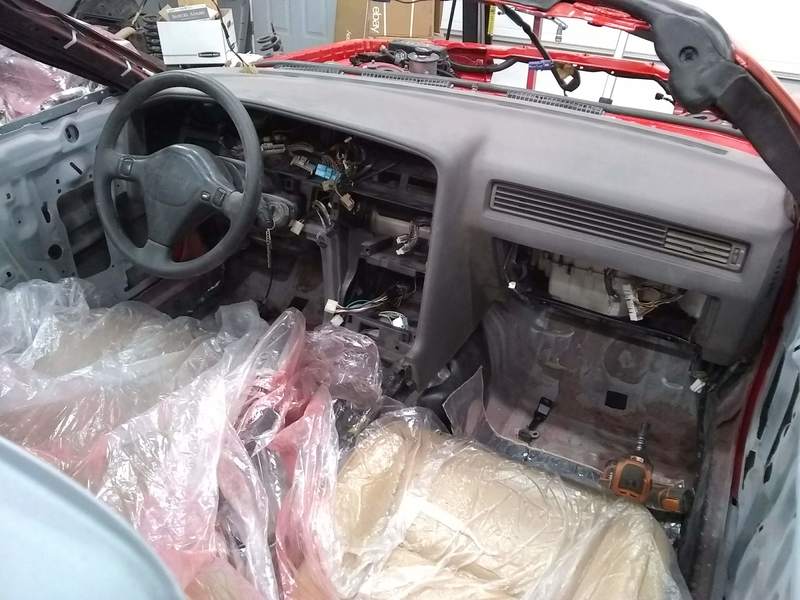 Also dropped in the drivetrain. The rear trans mount fits over the AR5 nicely, just need to make a bracket. The trans fits in the tunnel just fine with the extra meat removed. 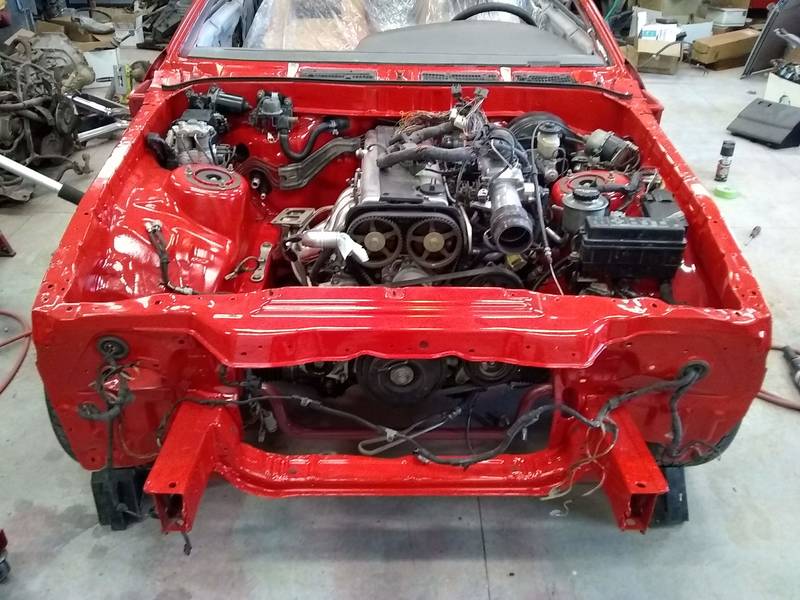 Well, we're back in Texas again.
The supra got a windshield for the trip. Loaded up on the wrecker to go to the glass shop. The joys of living in a small town. Only one glass shop in the area could get a Supra windshield in time for the move, and they don't do mobile installs. 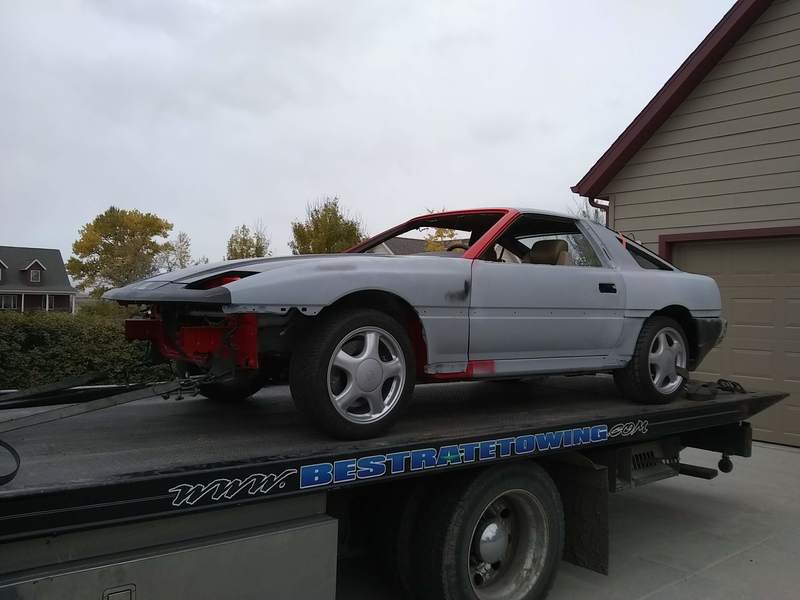 Back from the glass shop. First time in 10 years that she's had a windshield. 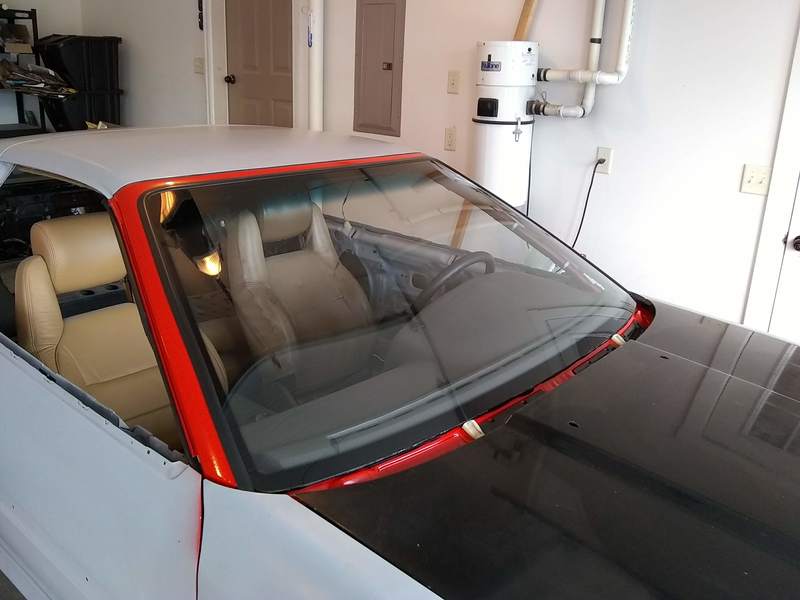 We did U-Pack for our stuff and I used U-Ship to ship the Supra. They didn't show up on time so I had to leave the car with the neighbor. Finally they picked it up a week behind schedule.
Here it is arriving in TX 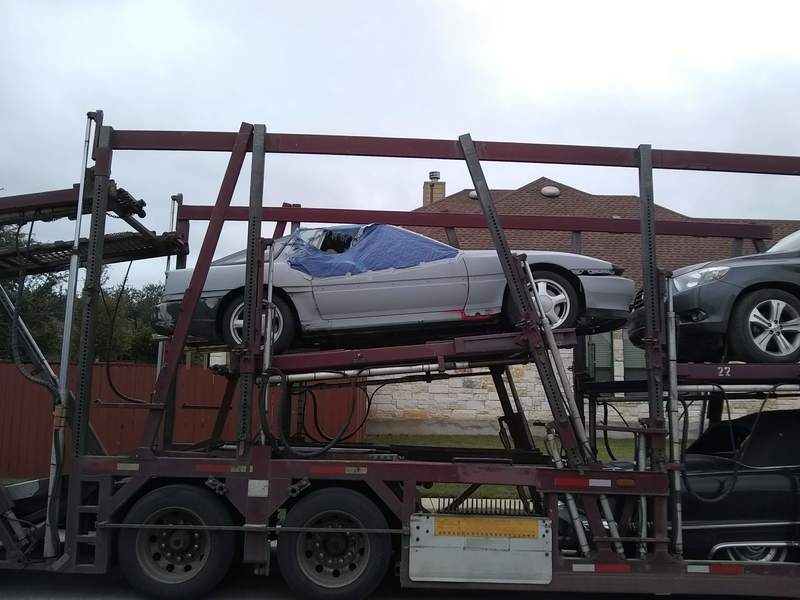 I had my cousin throw some tarp pieces over the door glass openings since I wasn't able to get the glass installed in time before leaving. So much for that idea. Thankfully, due to the 1-week delay, it missed the torrential rain that we drove through on our way down. So the delay turned out to be a blessing. Despite the gaping holes, the car was dry inside. 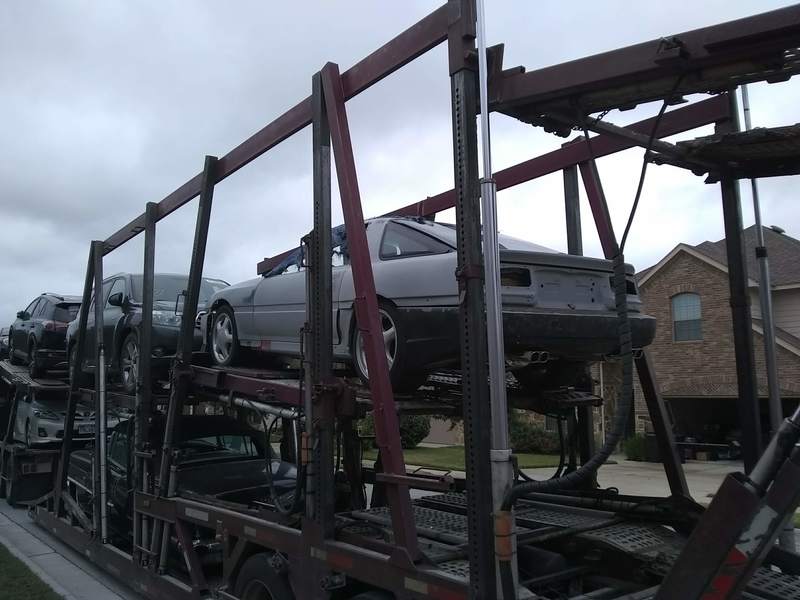 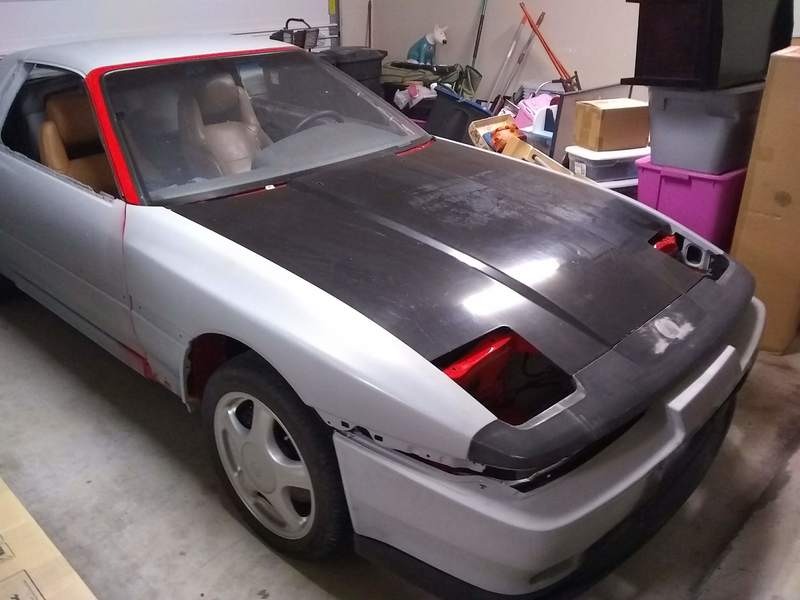 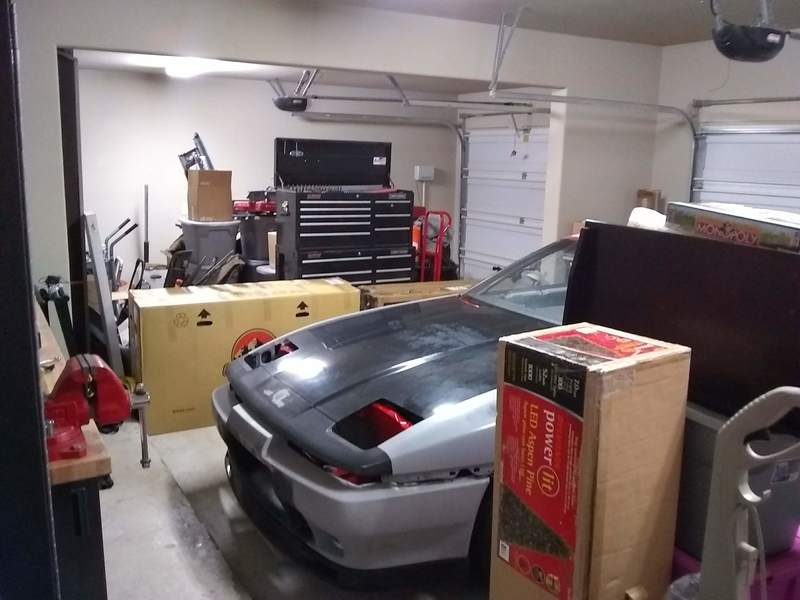 So...much...stuff
Maybe some day we'll be settled and I'll do something with the Supra, but it likely won't be soon. I'm contemplating getting out of it for good now, and getting something that I can actually drive. Maybe another Z-car or new '86. Or -gasp- a coyote Mustang. At my "spare time rate" it'll probably be at least a couple years before I'll be there with this one.


plaaya69 said:
Glad to hear it made a safe travel. On that windshield were you able to find a new one or a used one? I like that they replaced all the black trim around it and made it one piece now.

I hope you can find some local Supra people and keep your inspiration going for your build because it has been coming along nicely and will be even better once it is on the road. Smiles per gallon is plentiful in the Supra
Click to expand...

It's a new windshield. TriVal is the brand, it's a Pilkington line... it's the only kind I was able to find.

My original windshield trim was trashed or I'd have used it, I don't mind the one-piece molding if done right but the OE trim in good shape fits the character of the car better IMO.

Maybe I can enlist the help of dok33 or rajunz one of these days... not sure too many others are still around.

Thanks so much to @Jeff Lange for getting things back online here!

I've restored this thread to the best of my ability, updating earlier images to S3 again and restoring later posts from archive.org.

I haven't been working on the Supra lately, it's been in storage since shortly after the previous post. Prior to that, I was able to get the brake and fuel lines back under the car, front and rear sway bars installed, a bunch of things in the engine bay put back in place. We moved houses again as well and have even less garage space, unfortunately.

I did pick up this, in a bunch of pieces as someone's half-baked, disassembled project, with engine issues. But it does have a supercharger kit and it's back on the road now aside from a recently arisen power steering leak that's going to be a pain to get to: 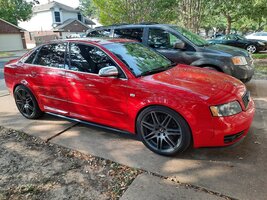 I also have another 1st gen Tacoma again, this time sunfire red pearl: 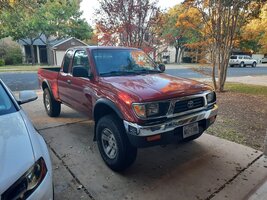 I'm also happy to say that the tan Tacoma is still faithfully in service at my father-in-law's.

I am currently working on getting some garage space cleared to bring the Supra back to the house and start to make some more progress this spring. My first goal is going to be to get the hydraulic brakes back in operation, after that get the fuel and electrical systems back in working order, then get a driveshaft figured out.
You must log in or register to reply here.
Share:
Facebook Twitter Reddit Pinterest Tumblr WhatsApp Email Share Link
Top Bottom