I got excited thinking I was going to find a real update in here Diego!

LOL.
I am sorry, GC89, and everyone else kind enough to read my thread. I have been weighed down with a longer work schedule(I'm sometimes gone 10 days at a time), relationship(life) obligations,
and I will admit that buying the 89 turbo has taken away a lot of my time as well. Add to that, a lot of back and forth travel to NY for a family emergency for the past several months,
and I haven't had time OR money for my poor '88.

Having said that, I do promise to provide progress within this month.

Well, I just sat here and looked through the rest of your build thread. Killer build. I absolutely love it. Any updates?

Thanks for looking through it all. Unfortunately, I haven't been very active with the project lately.
When last I was working on the '88, It had developed a bad oil burning issue. I pulled the turbo(brand new PTE6266) and it had been pushing oil through the rear seal.
I really don't know why, as the drain is AN10, and very vertical, and I have a restrictor on the feed. I've replaced the seals in the turbo, put in a temporary see-through silicone
-10 feed(so I can see if it backs up), and reduced from a -4 feed line to a -3feed. We'll see if that corrects the issue.

Sadly, I've been putting time, energy and $resources$ into my '89 daily driver. But I've pretty much run out of things to do to it, so I'll be back on the '88.
All that's happened lately, is that I've decided to go with an ECU master DET3 piggyback, rather than the maft pro. They're quite similar, but I
did like the idea of launch control and a few other features that the DET3 offered. So that's sitting in a box, waiting to go in.
I also bought a stainless radiator 'cooling' plate, mainly for aesthetics. I hope I can offer updates in the near future, and
thanks guys, for taking the time to read my 'addiction journal'.
H

I made the mistake of buying another Supra before I was done with my first one. But I went backwards of you, my first is in 86.5 that I'm rebuilding to stock. And my new one is a 90 turbo Targa

Well, I'm trying to wean myself off buying stuff for the 89 Supra(new oem shift knob, custom fit floor mats and sunshade this week).
Today, a package finally came in for the project car: 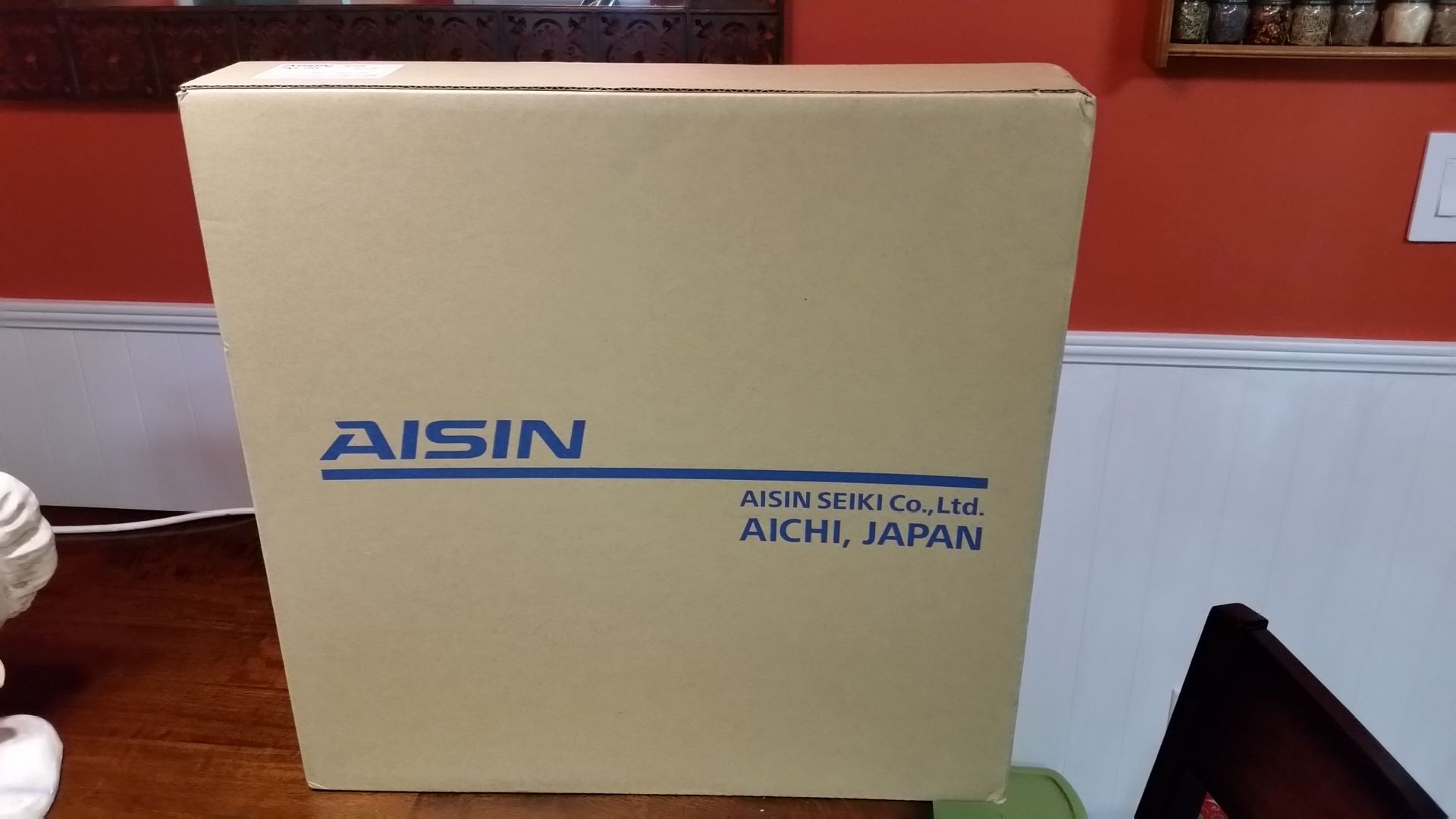 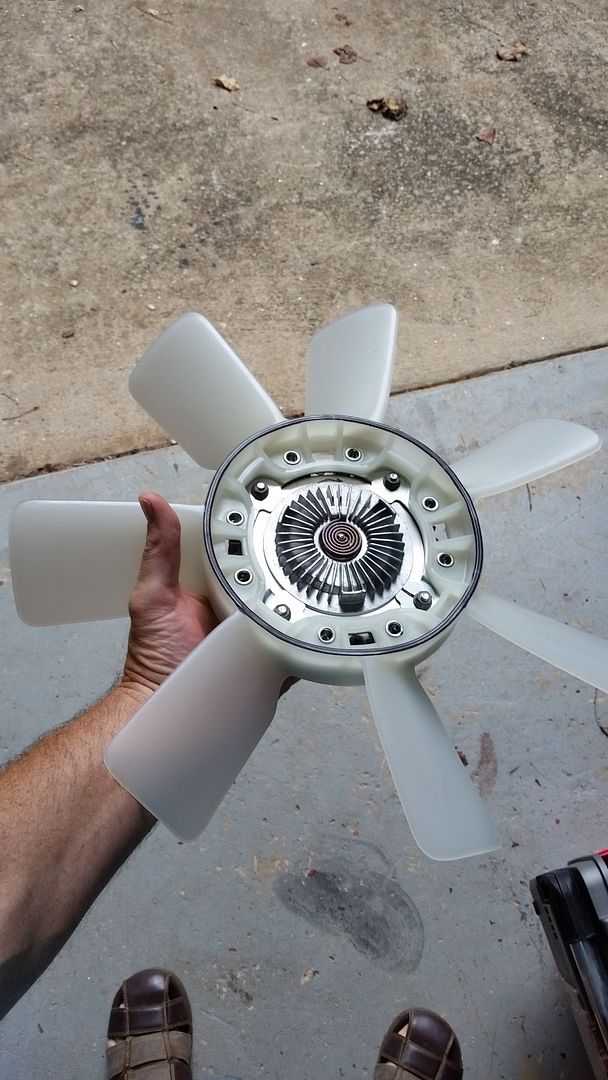 And installed with a new shroud(the '89 stole that, too): 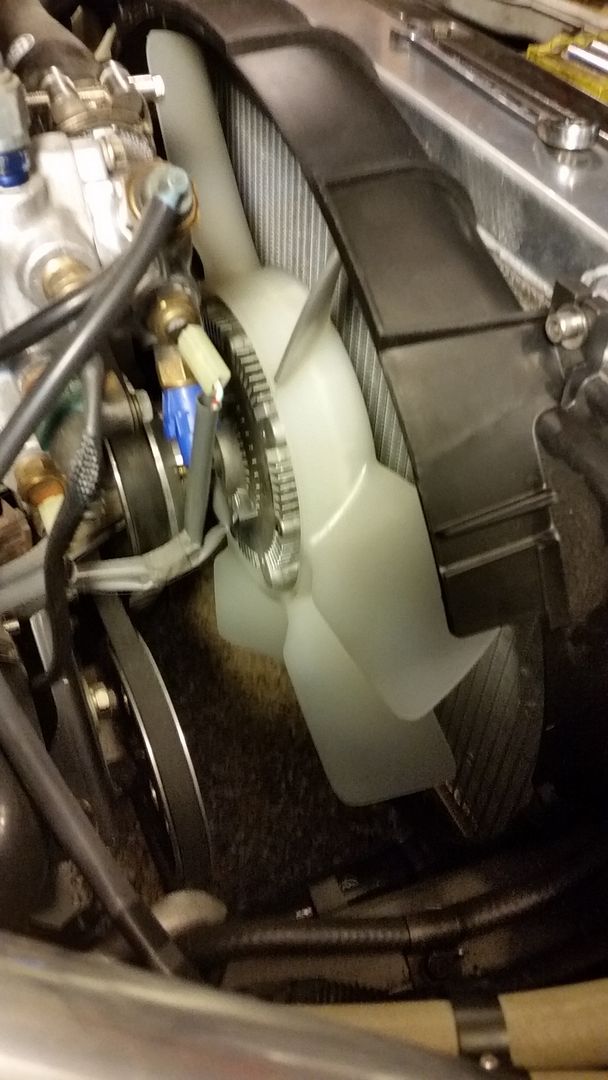 That's all I could do today. It started raining outside, and I have to get under the car to reconnect the exhaust.
That, and I had hernia surgery on Monday, and my belly started hurting, so I punched out.

No pics of it yet, but I have pulled the maft pro out, and begun wiring in the DET3.
I had purchased this piggyback used, so I was a little scared that it might be faulty.
I plugged the det3 into my laptop and gave it 12 volts, and thankfully, it seems to work.
Since it has an internal map sensor, I was able to blow into it, and see changes on the laptop readings.
On my next set of days off, I fully expect to have the car running on the DET. Then it's time to begin bodywork. Finally.

PS- I picked up a new targa tool bag from the dealer. The car never came with one, though it did have the tool. It was only 9 bucks. I found out that all the targa cosmetic caps(plugs) are discontinued, but I'm looking into the mk4 caps, because they look identical. I'll report back. 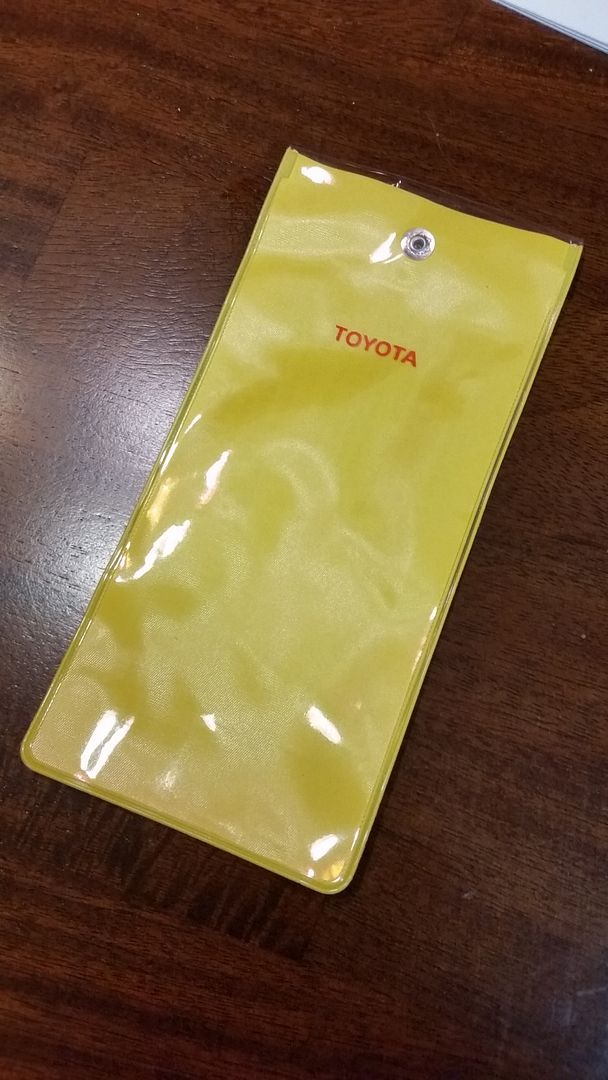 So, I'm slowly chipping away at the DET3 wiring.
The manual is a bit less than informative, but I'm slowly getting everything connected. 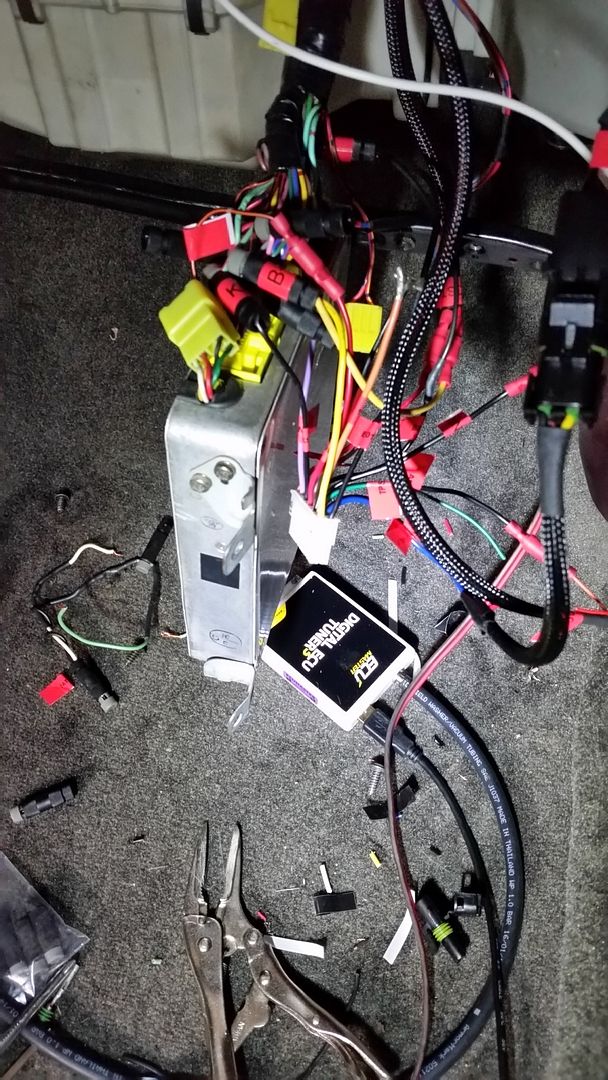 All that's left at this point, is wiring in launch control, map switching control, and running the reference line for the built in map sensor.
This last one required me to rearrange where the sources were for the BOV, and map reading, as I don't want them from the same source.
My Synapse valve uses the push-to-connect type fittings, so I pulled out the oem BPV hard pipe, and will be welding onto it a 1/8npt female fitting.
Then I can go push-to-connect from there, rather than at the back of the intake manifold.

that fan looks like one for an NA 7M, is that what you wanted?

Yup. I have measured the 'thickness' of both the NA and turbo fans. The na is a shallower blade, and does not extend as far forward into the radiator.
I had a turbo fan hit the shroud and break apart, due to the increased thickness of the Fluidyne radiator.

Got the fitting tig'd on today.
Well, that's not exactly true. The factory tube was too fragile, and the guy couldn't tig the fat fitting on without melting it.
So instead, he welded it onto a tube section with thicker walls. Then I chiseled off the bracket and mig'd it on at home. I was even able to
mig the bottom barb section on without burning through. 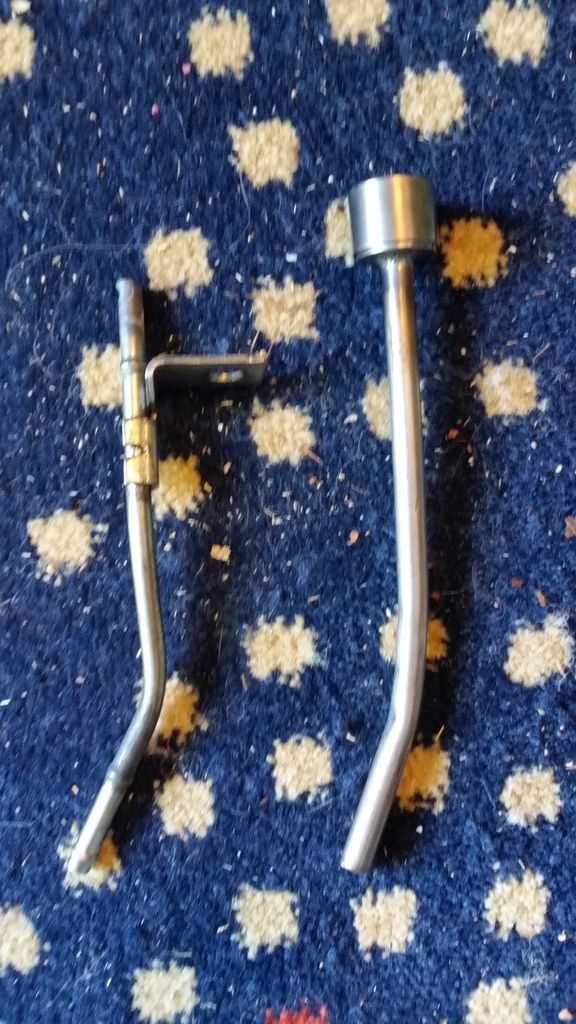 New, with bracket and barb: 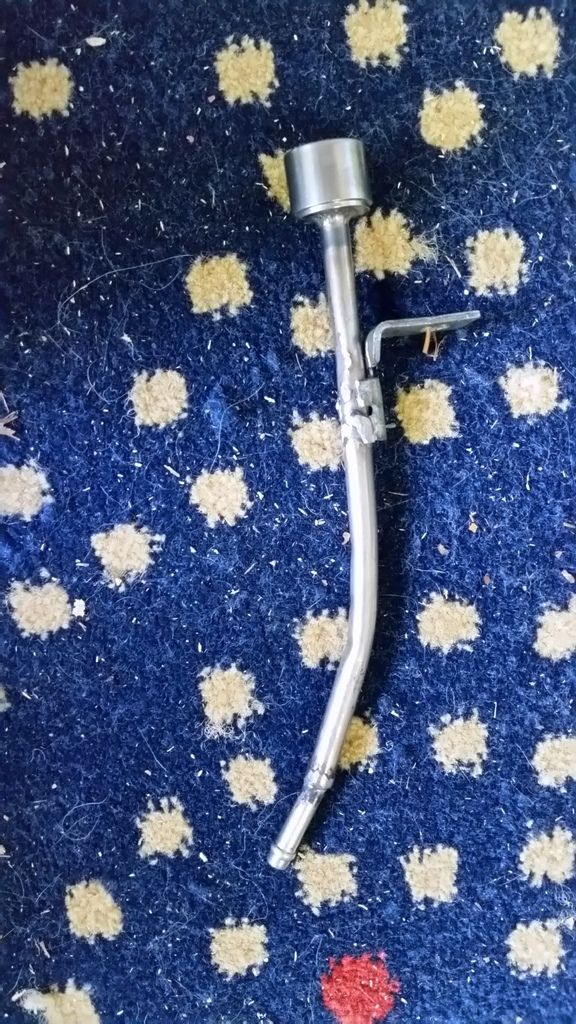 Oops.
I just realized that I never showed an installed pic: 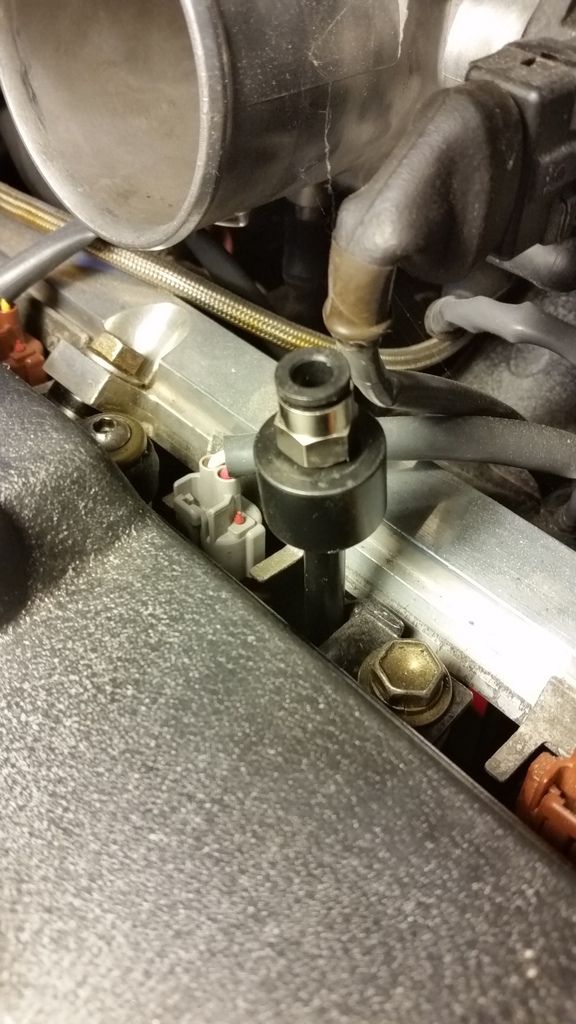 Also, I finally got around to installing the reference line for the DET3.
You can see it here, just above the harness grommet: 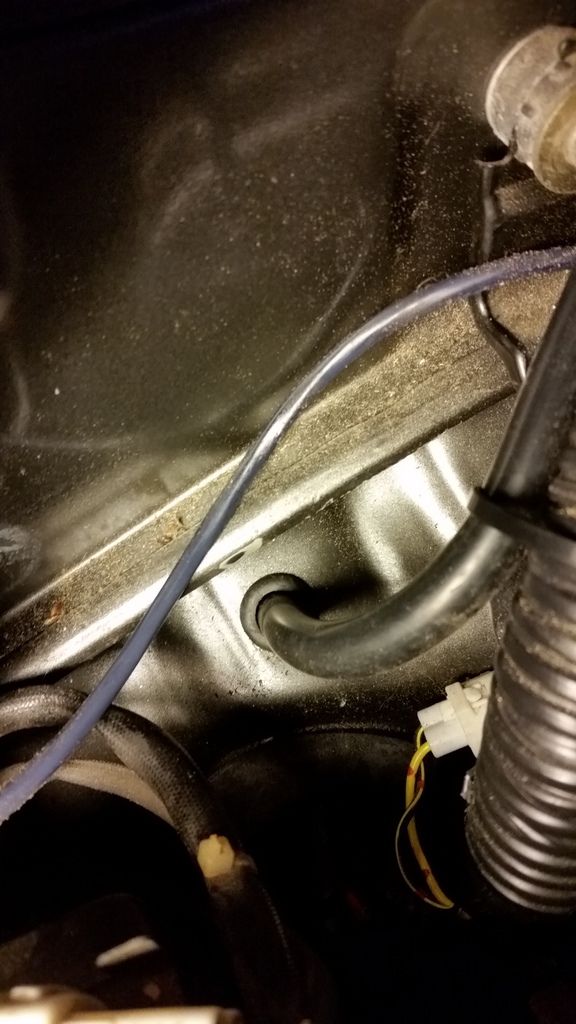 So, a small update,
I do have the car running now on the DET3, although there are still a few issues to correct;
My rpm reads 175 at 900rpm, telling me that my ignition configuration is incorrect.
And my GM iat is showing -40 degrees celcius. Otherwise, the only additional connections I need to make,
are the fuel map 1/2 switch, and the launch control. Then I'll button up the ecu and put the glove box back in.

Posting here to pull this thread back up to current. I have to spend some time replacing ALL THE DAMNED LINKS!

Over the next couple weeks, I will be replacing all of the dead links that I can, and adding a few new pics.

Yesterday, I installed the copper crush gasket for the turbo's Vband clamp, and that solved the leak. So, I was finally able to
reinstall the compressor cover, turbo blanket and all of the intercooler and intake pipng. It's the first time that the motor has been completely
assembled in over a year and a half.
Today, I played around with the Det3 a bit more, and got the afr's balanced out in the lower half of the map. I actually took it out on the neighborhood streets for a short drive,
just to watch the afr log at higher manifold pressures, but my street is too small to actually let me get into boost in second gear(speedbumps). But it's running pretty well.

Once I make the last two wire connections on the Det3, I will begin Stage 4- body work. Time to remove all of the trim, moldings and weather stripping, in preparation for paint work.