I like your new veneer front subframe, very swish

adds alot of class. plus its light weight and is now the only omni directional steering supra in the world.

next up is the sailing mast install

teaser of the mast and sail install

Is that a hearse parked next to your supra?
S

IJ. said:
99 times out of a 100 it's because someone has used something sharp edged to jam a spoke so they can undo it and the mark left has created a stress riser...


It's the Spray hole in the beam that squirts Oil onto the thrust surface of the bore that's missing.
Click to expand...

It looks like they offer the hole on the small end as a option?

it's been a while, thought i'd update. I've been busy with work the past year along many other distractions, but i've started work on the car again. I'm currently cleaning up my garage and organizing the giant mess of parts I have. Also, I sold my proefi and went with haltech 2000 instead and got a few other goodies. Goal is to get the garage organized by end of the year and get the engine in for huge mockup work i have ahead of me. Nice to seean update! Why did you switch to Haltech?

Proefi is a rebranded ecu with shitty hacked together custom software for consumers. It really requires a licensed tuner with the super expensive OEM software to access the entire ECU and properly tune it. The Haltech software is so much better and you're able to access all the features. It's much more oriented for self tuning.
S

Oh I didn't know that? I'll do more research on it? Who's ECU is it that they are rebranding?
S

Beware of those came gears. They tend to break.

Can't find where I read it. I'll try to find it, but the proefi dealer boxes have the full tuning capability with licensed software from the OEM to develop the firmware they offer. The proefi ecu's are marketed as performance ecu's but really they are just a debugging platform for OEM engine/systems development. The proefi ecu hardware wasn't designed to be run in actual cars on the street. I didn't learn this until like a year after I bought mine and after trying the shit software I needed to get rid of it. It has some of the shittiest software i've seen. They threw together to do 80% of what most people need, but this is why you need to load firmware for your engine configuration because the software is limited. The haltech elite is developed from the ground up by them and doesn't have the crazy bugs people encounter with the proefi.

also, first time i've heard of the titan cam gears breaking. How do they break?
S

They brake on the spokes. They are made in china.

I'm not using my titan gears on my build anymore, ive heard and seen stories of high lift cams causing more strain on the gears and breaking them. I'm going to run stock for now, and if I need adjustable then I will try to find a set of old titans with the circular holes instead of the spokes like we have.
S

I would get the Technico gears. They use the stock with a machined solid billet middle and made in Australia.

suprapilot said:
I would get the Technico gears. They use the stock with a machined solid billet middle and made in Australia.
Click to expand...

+1 on these, very nice pieces.
I sent Andrew 10x sets of cores so he has more on hand to machine up for the supra community.
Reactions: suprapilot

Piratetip said:
+1 on these, very nice pieces.
I sent Andrew 10x sets of cores so he has more on hand to machine up for the supra community.
Click to expand...

Do you know if Andrew is working on any other parts for the Supra? The few Supra parts I have seen from him do look good.

i'll prob get the Technico gears. I have andrew's oil pump drive shaft thrust bearing in my engine he makes some great shit. I am in the process of getting my own ridiculous CNC machine into my shoppe so stay tuned, lol.
Reactions: suprapilot

plaaya69 said:
Do you know if Andrew is working on any other parts for the Supra? The few Supra parts I have seen from him do look good.
Click to expand...

All the parts he makes for the 7M are here:
http://technicoracing.com/cs/index.php?dispatch=categories.view&category_id=263

Almost done with fixing the walls/floor in my fab room. Got another toolbox and put the stuff thats overflowing from my main box. Took a look at the cnc i'm gonna get. I'ts an early 80s Shizuoka AN-S with dynapath retrofit. I'm taking alot of it apart to fit it into my fab room. Sweet mill. What is the protective heat shield you are using on your turbo drain hose?

3p141592654 said:
Sweet mill. What is the protective heat shield you are using on your turbo drain hose?
Click to expand...

its just some aluminized fabric sheath

To help me get organized and tooled up better I bought a vidmar cabinet. Theres 2 more i'm gonna pick up this weekend. Merry christmas to me, lol. 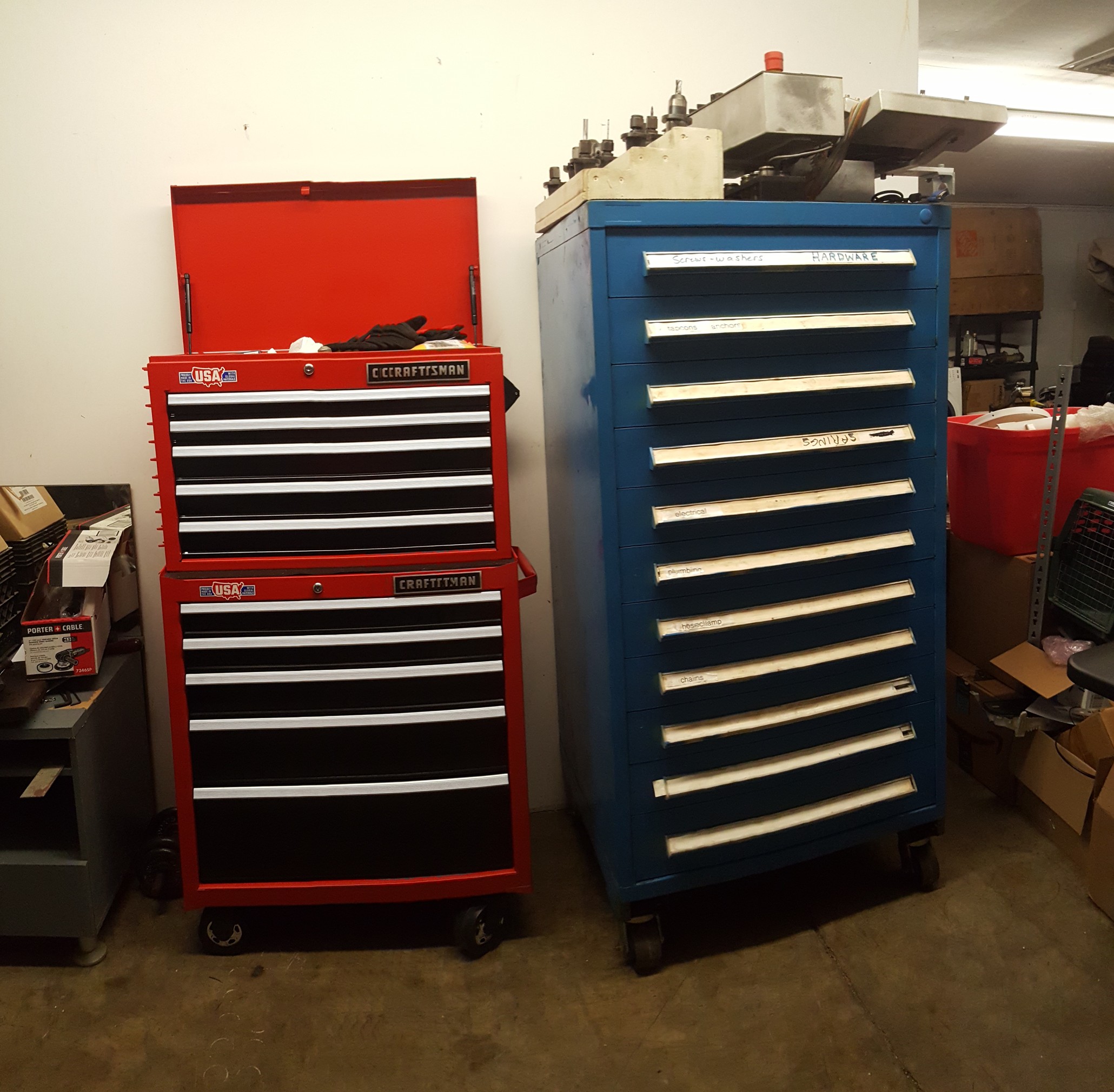 Nothing too exciting. I got the last cabinet and a ton of schaller bins and started organizing. If anyone wanted to know, i bought the cabinets, hardware and a bunch of tools from a retired welder. My storage room is almost ready for paint.
Last edited: Jan 17, 2019

Getting close to getting my parts room organized. Packing this sardine can so I have space to get the cnc knee mill in. Should get it early next week.