JISupra88 said:
could you disclose the name of machine shop that did the arp inserts? I'm also looking to get that done to my cylinder head when it comes off
Click to expand...

Well yesterday morning the Supra did not start but lucky it was parked in the garage. Right away I noticed I did not hear the fuel pump prime when the key was first turned so I started to diagnose it. Found the fuse I added for the fuel pump was blown. Tested the wiring, had to drop the tank and found a bad factory rivet connection/factory wiring on the positive wire side on the fuel pump hanger: 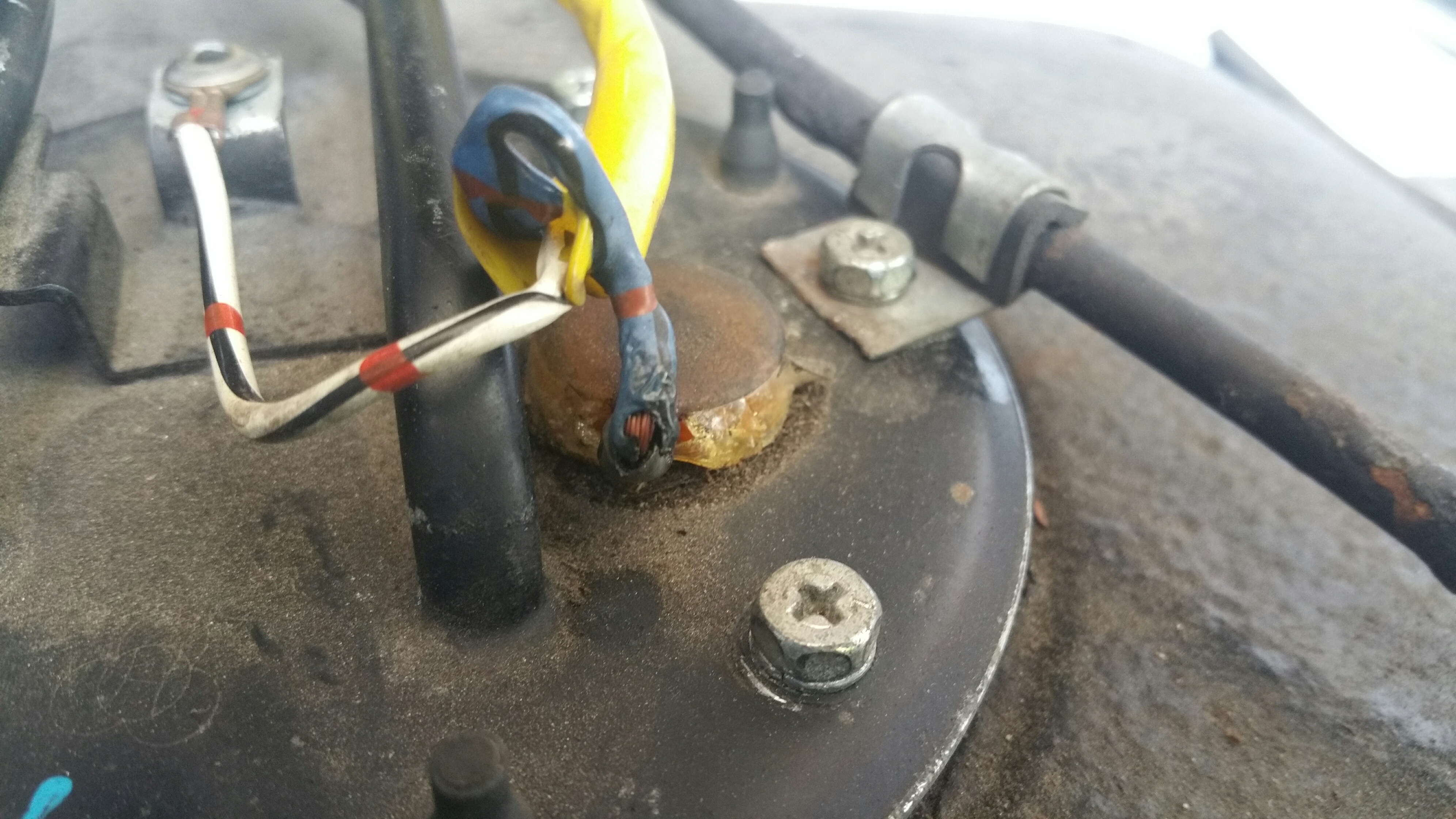 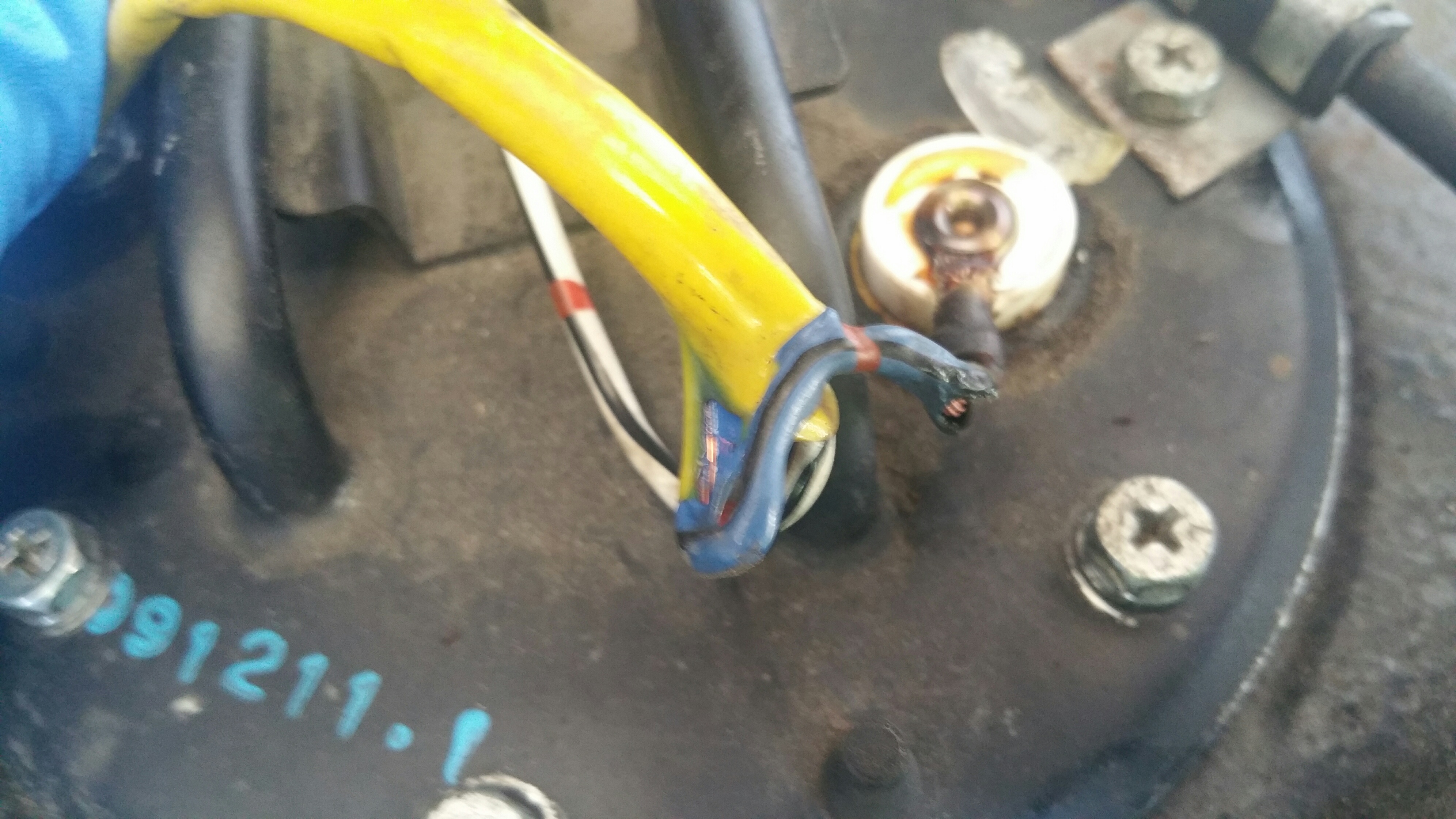 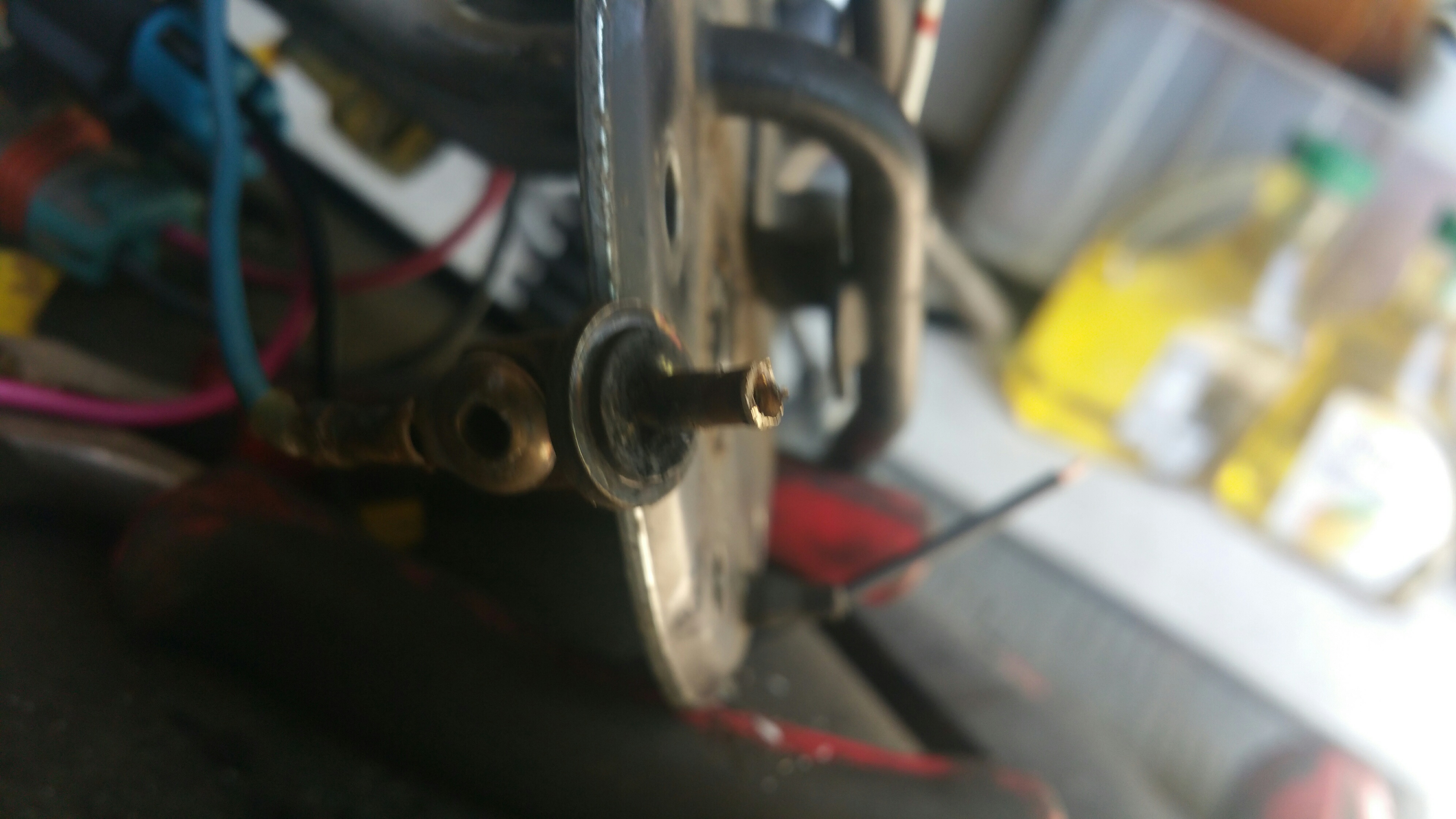 After going to all local auto parts stores and asking for a electrical bulkhead fitting for the fuel pump hanger (even bringing in the fuel pump hanger) they were all lost and did not know what I was talking about. Final stop at a Ace Hardware and I got all the stainless steel hardware, 12 gauge fuel rated wire, nylon washers with a insert and fuel tank sealer as well for extra insurance. Also got rid of all those factory ground rivets too and put bolts in place with new wiring. Fuel pump primes great now and sounds healthy after the install plus no more blown fuses. 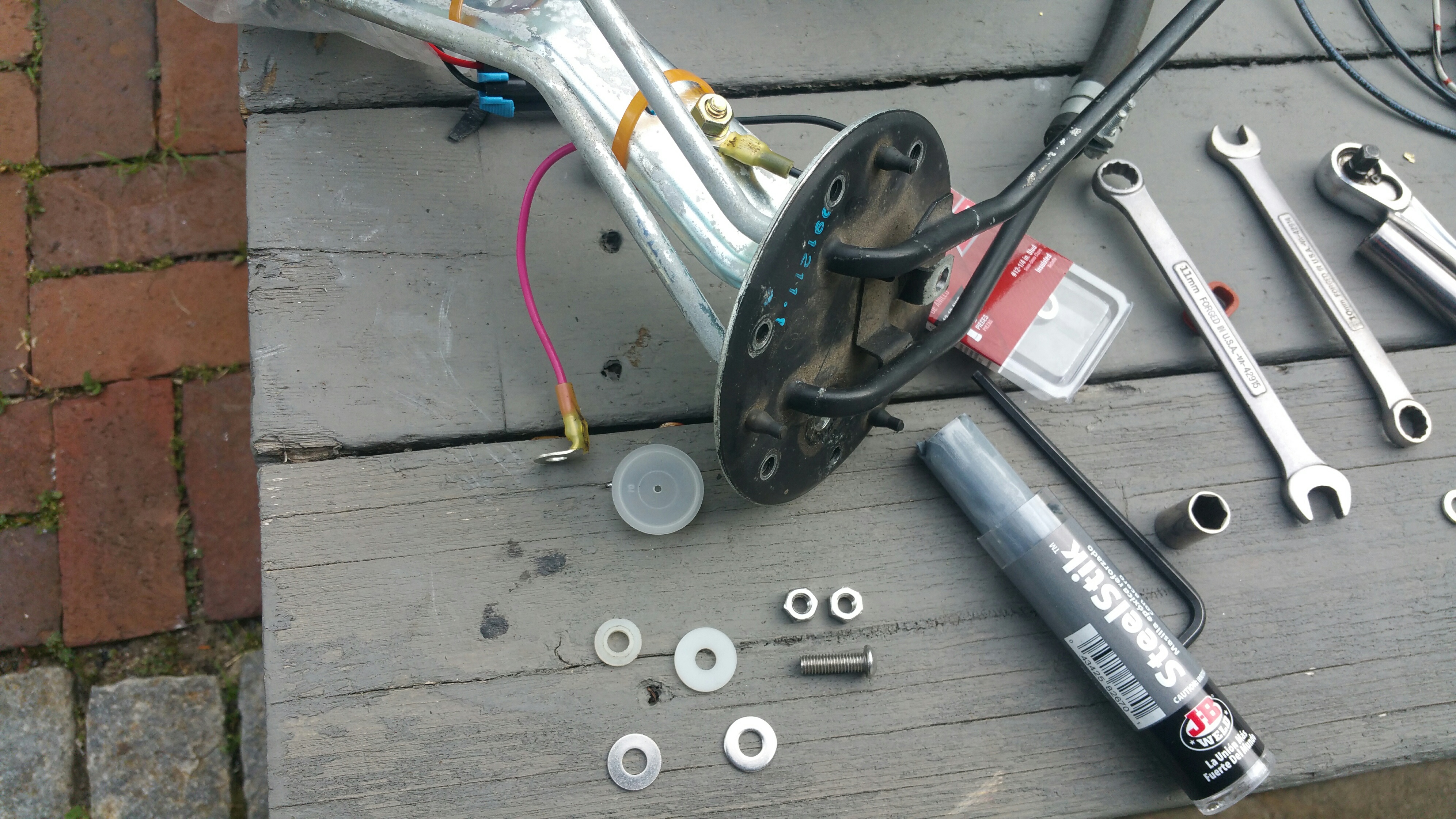 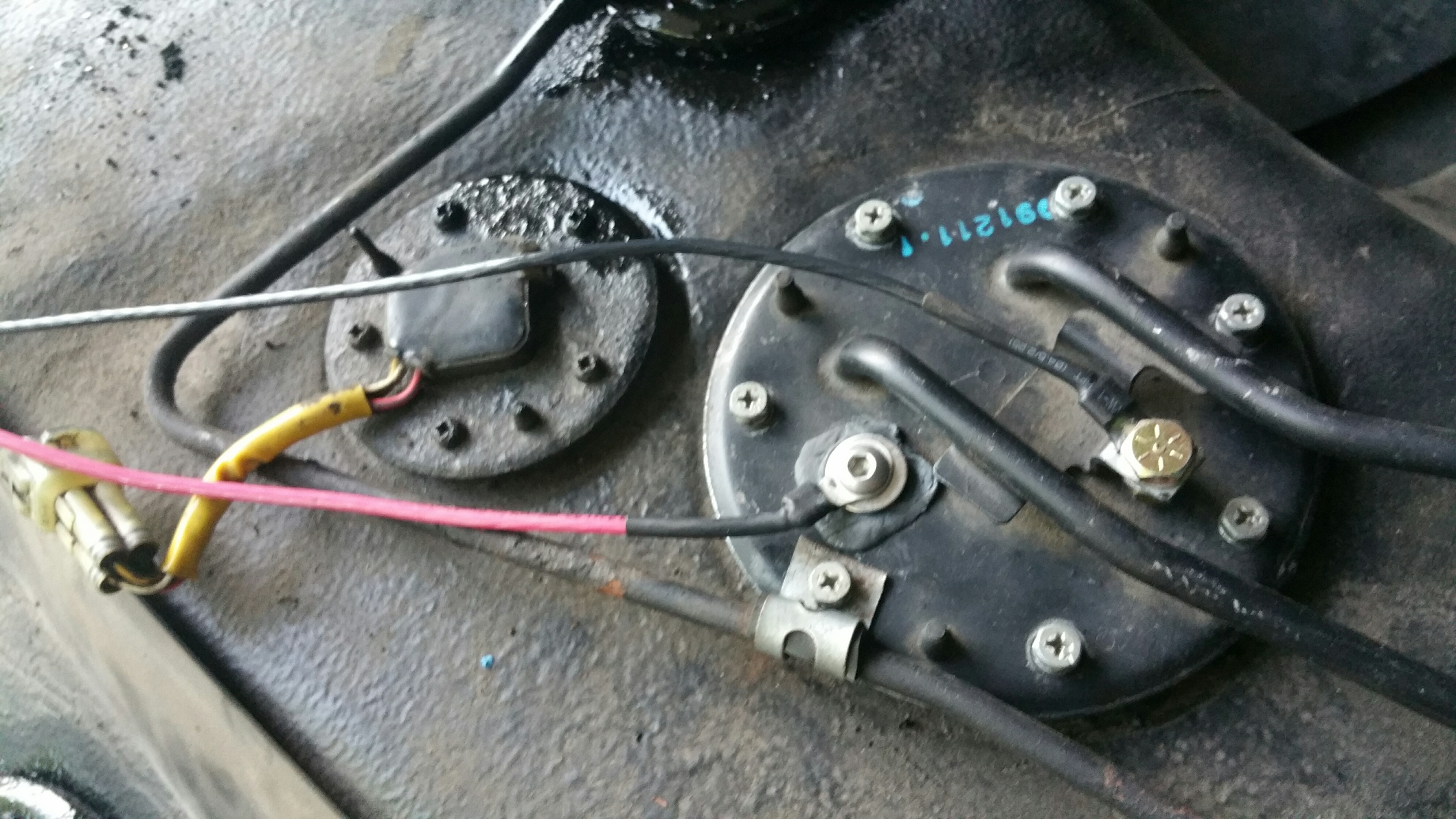 I had to say good bye to my old friend. No one seemed to want a free Supra shell for a project or maybe even a drift build so it was time for it to go. Thanks for the 11 years of reliable transpiration (5 of them being a daily driver as my first car), fun times in heavy snow, car meets, winning and loosing races as well as breaking necks along the way. The next burnout will be dedicated to you. 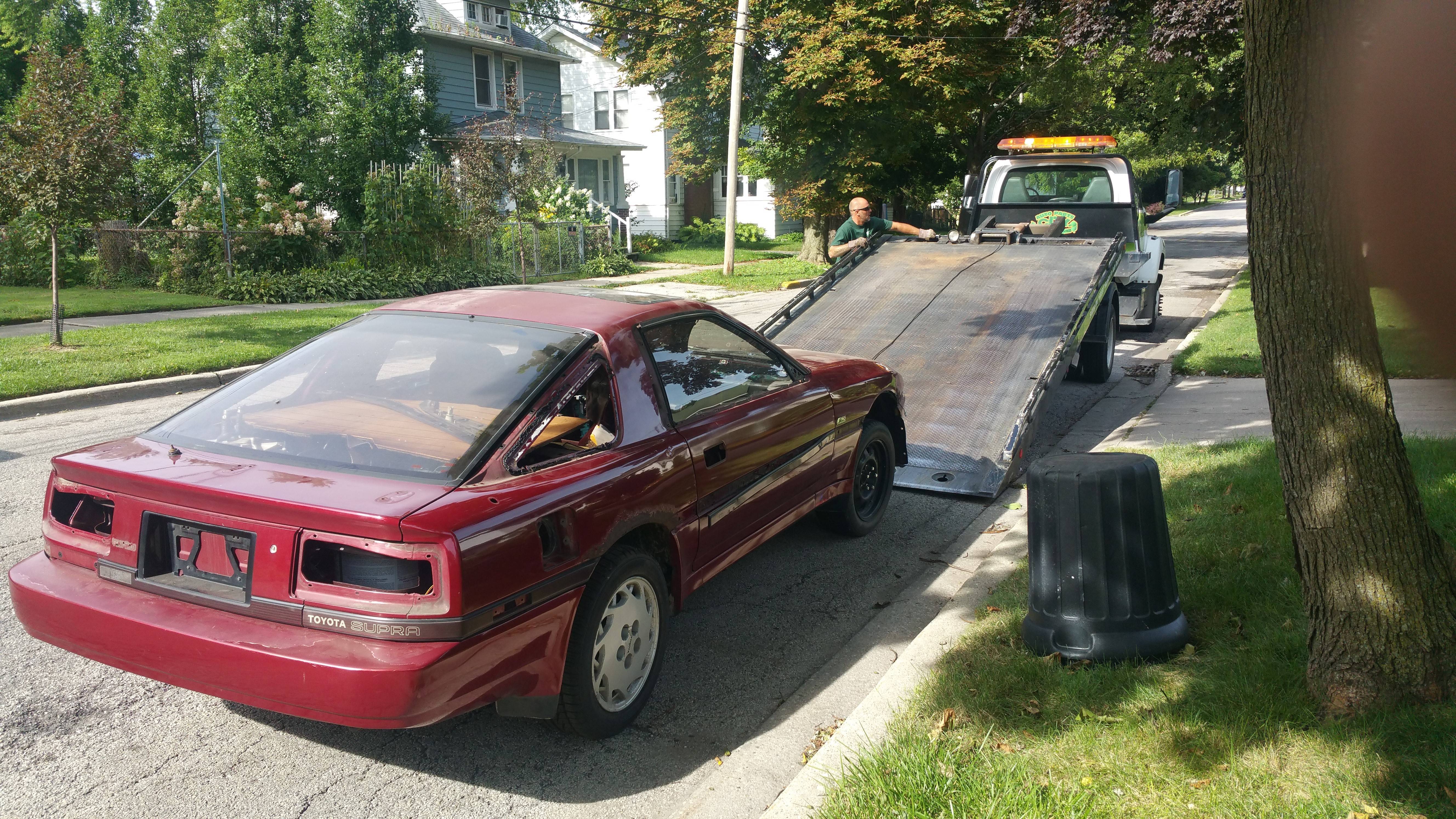 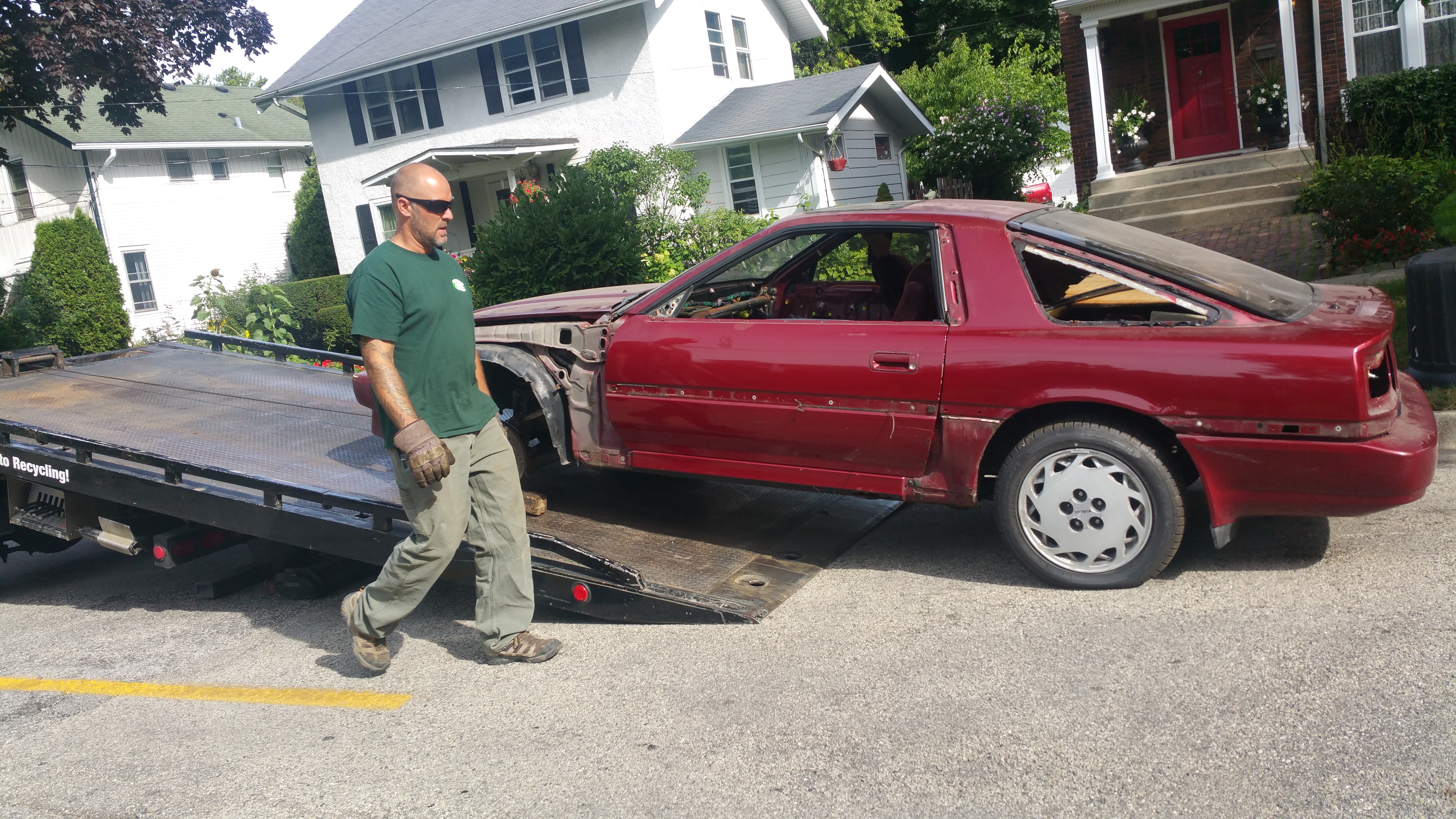 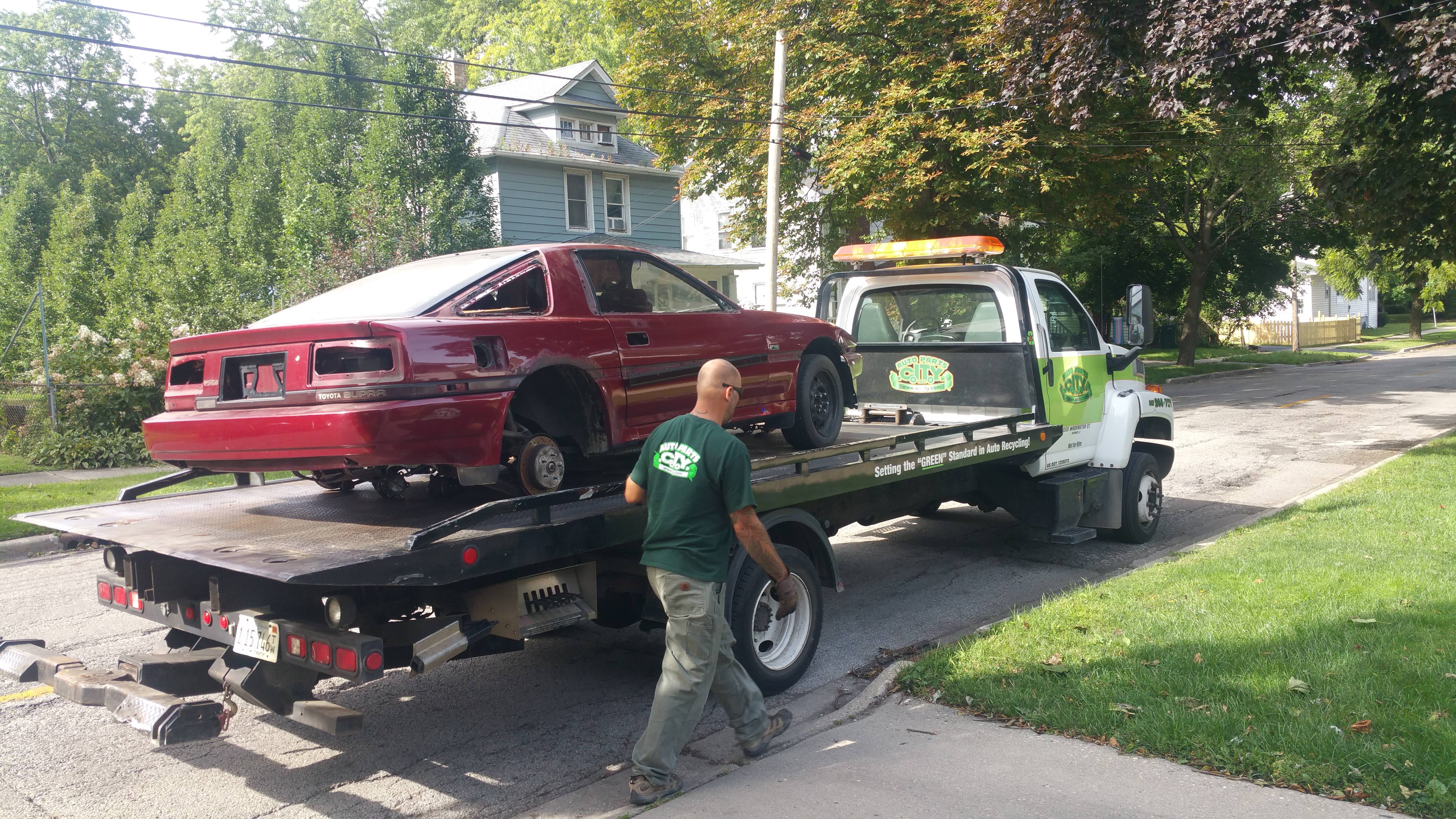 Ah well. Got to make space!
Maybe someone will see it and steal some parts.
Reactions: plaaya69
Z

damn I wish I had more space
Reactions: plaaya69
J

Darn. I just moved back to Illinois and have been focused on closing on a house so I havent checked SM for a bit. Definitely could've put that shell to good use.

Guess it wasnt meant to be.
Reactions: plaaya69

Piratetip said:
Ah well. Got to make space!
Maybe someone will see it and steal some parts.
Click to expand...

The person who was suppose to buy it for $300 pretty much wasted my time for a month since he could never get a place to store it so I stripped it down and sold off mostly everything that was still on it. Now that I have the space I do not know what my next project vehicle will be? I want to build a 2jz and push more power than I currently have for another vehicle but I kinda want a 73-78 GMC MotorHome to update/restore and take on some long trips too. Gotta just wait for the right timing and see what comes up first.


Z06gette said:
damn I wish I had more space
Click to expand...

It did need some bodywork on the rear quarters but it still was a great runner.


JISupra88 said:
Darn. I just moved back to Illinois and have been focused on closing on a house so I havent checked SM for a bit. Definitely could've put that shell to good use.

Guess it wasnt meant to be.
Click to expand...

If you wanted to call City Auto Parts in Gurnee,IL they might still have it but it did need some rust repair in the rear quarters. If I had the right tools and a bit of time I would have just fixed up the body rust but the current Supra I have now was just too good of a deal to pass it up. Do you currently have a Supra?

Upgraded the fan clutch earlier this year from a 2003 Toyota Tacoma with the v6. Wanted to see how it handled the Summer heat and it has performed very well. It sounds like a diesel 18 wheeler de-accelerating when you first start it on a cold start up and within 15 seconds back to it's nice normal quiet operation. It pulls tons of air, way more than I could ever remember on any 7m Supra in the past. 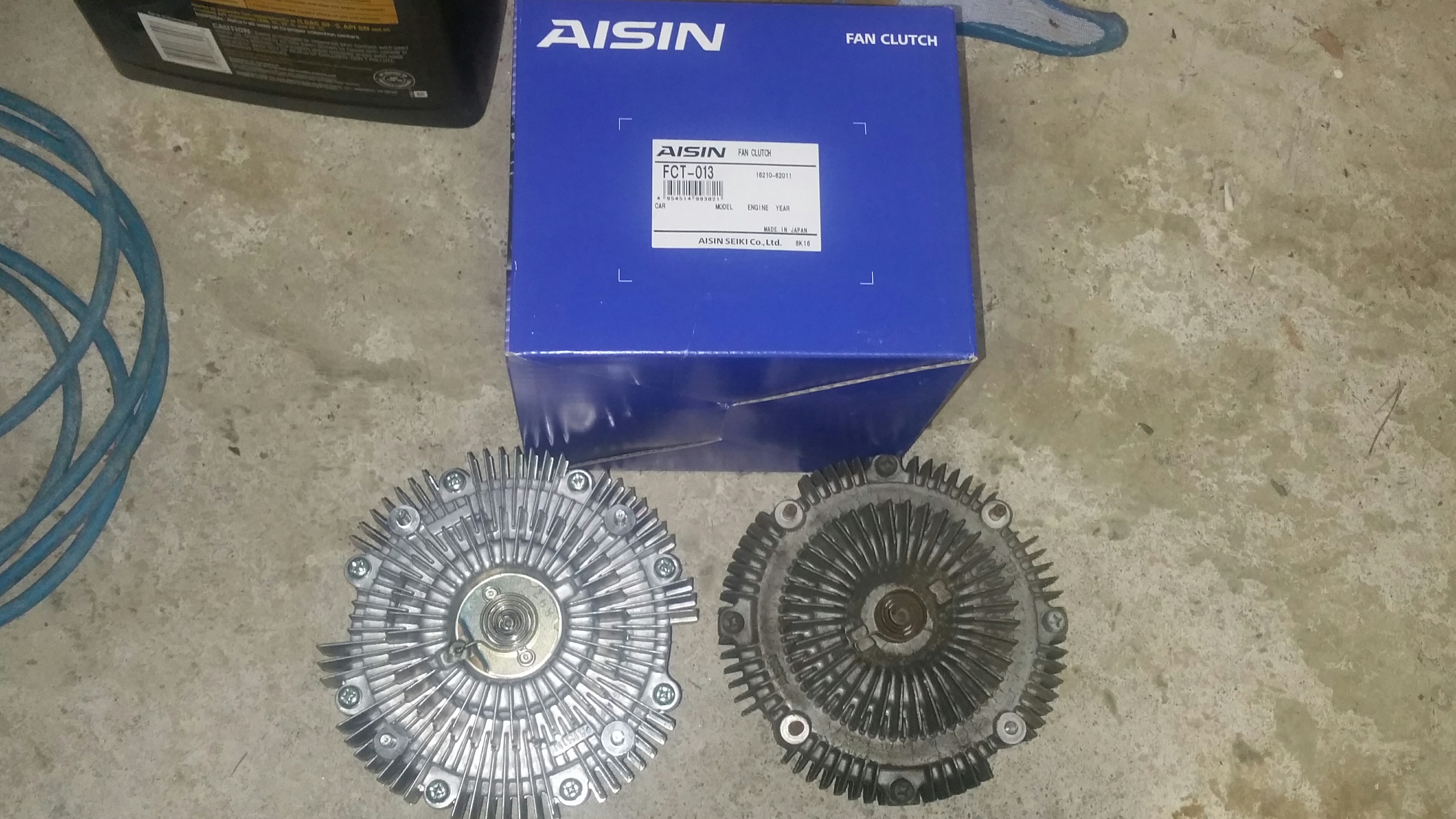 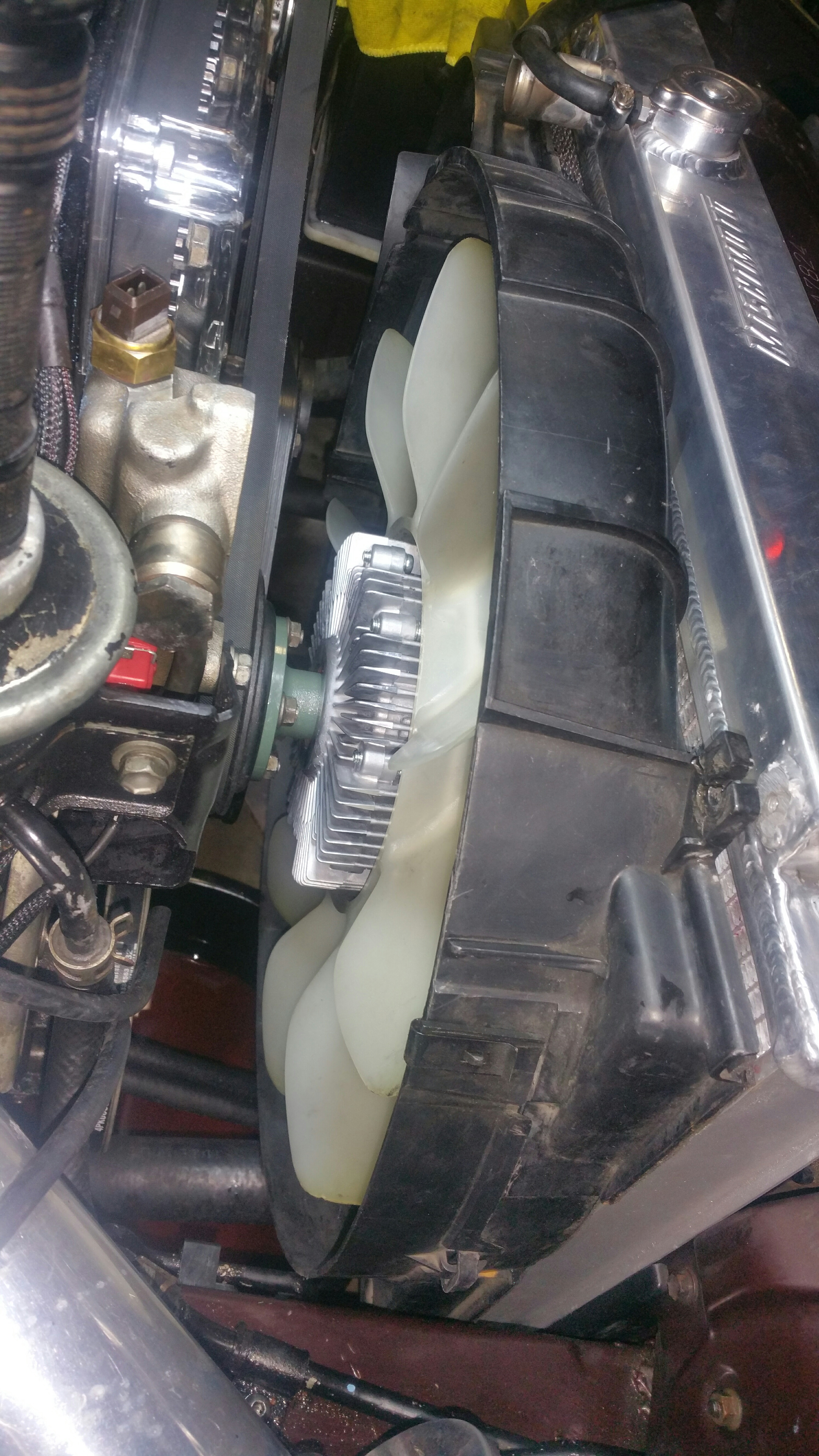 Spray painted the original burgundy hatch carpet with a few coats of matte black fabric spray paint to replace the worn out gray carpet I originally had: 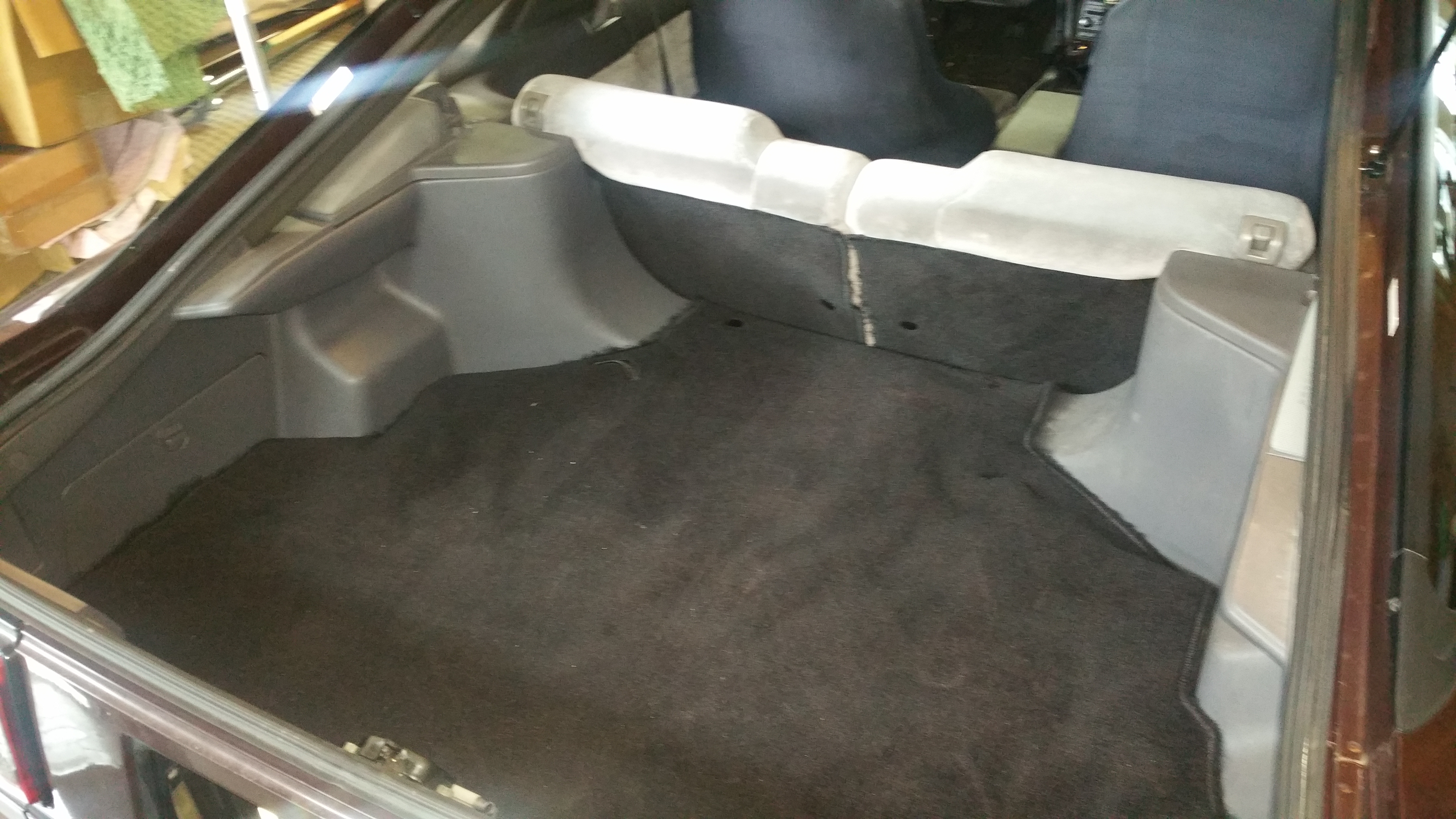 At the junkyard and found some nice OEM chrome top valve cover nuts from a early 90's 4 cylinder Corolla. I think they look better to hold the coil pack down instead 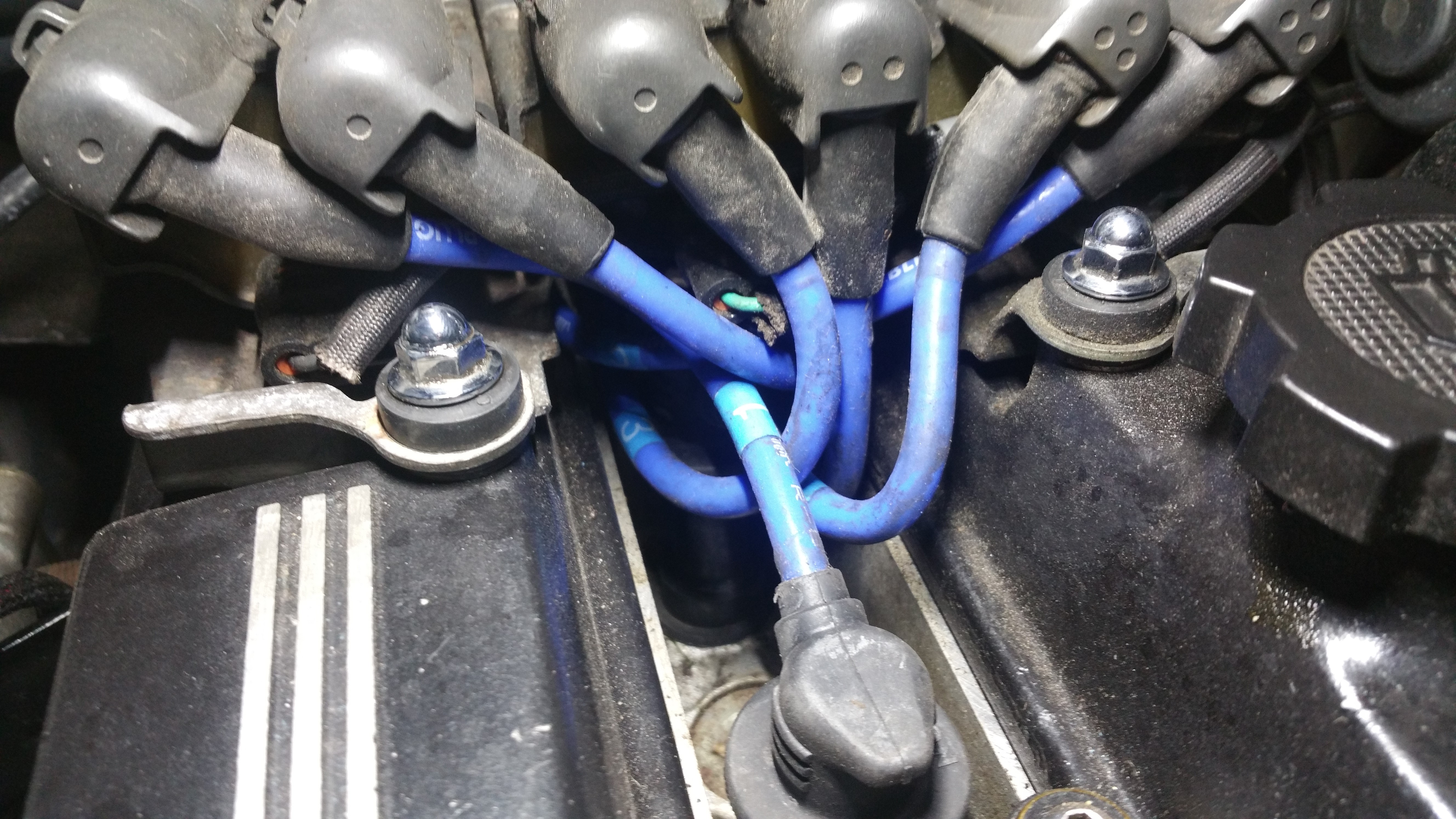 Speaking of the junkyard, I found my old 87 shell. The funny thing is after I made my rounds and was getting ready to leave I see someone taking the hood and other parts off of it. He was actually a local person I knew who recently got hit in his mk3 and needed some front end parts. Glad to see more parts being salvaged from it: 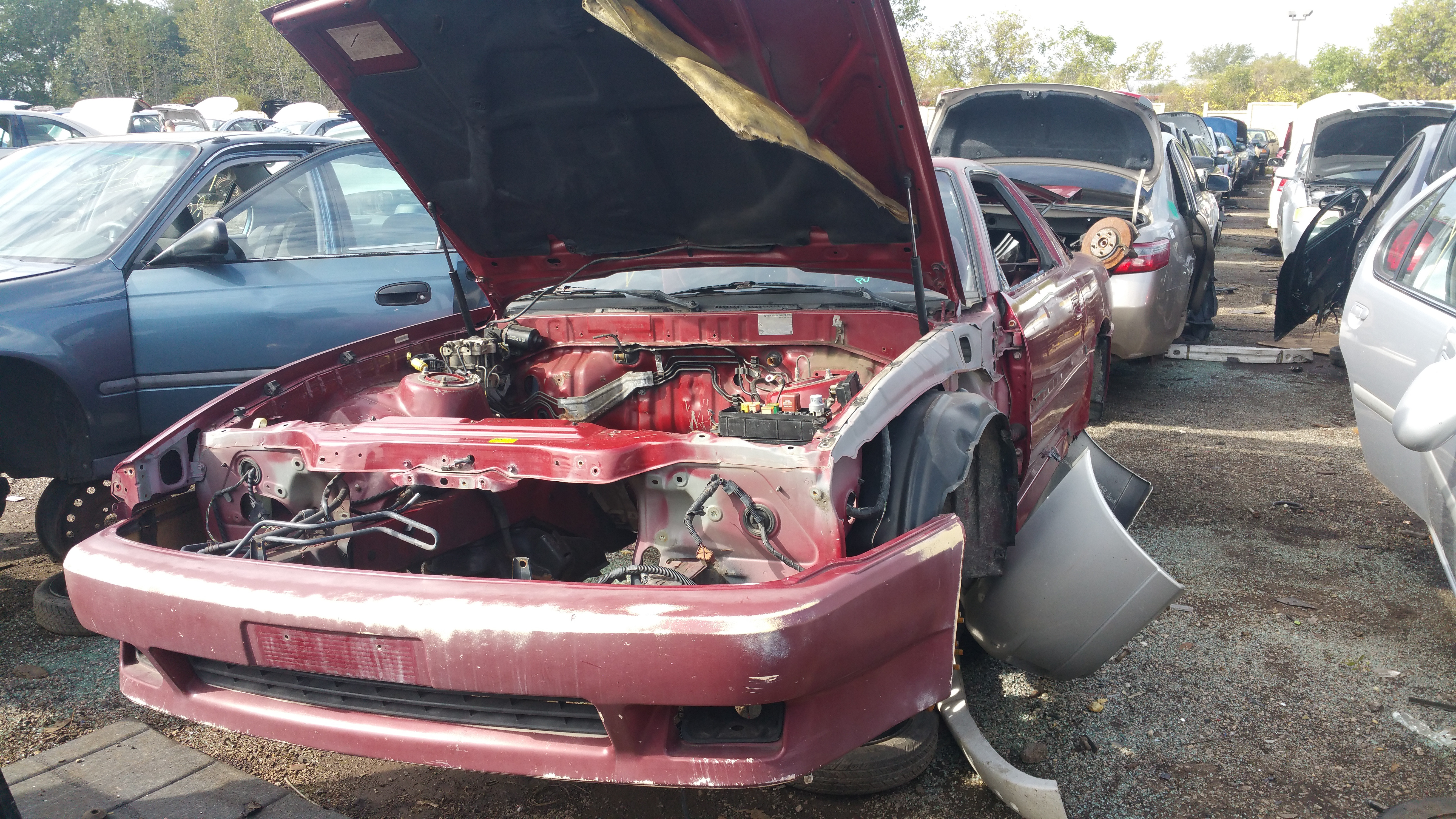 Working on the sunroof as the original aftermarket pop-up sunroof was a mess. The original install was a poor job, no rust preventive around the cutout and poor sealing causing it to leak during car washes. Bought a new CRL-SFC 17"x32" aftermarket pop up sunroof which was 1" larger on both length and width so I could cut out some small rust starting around the edges and used primer/rust preventive spray on all the newly cut bare metal: 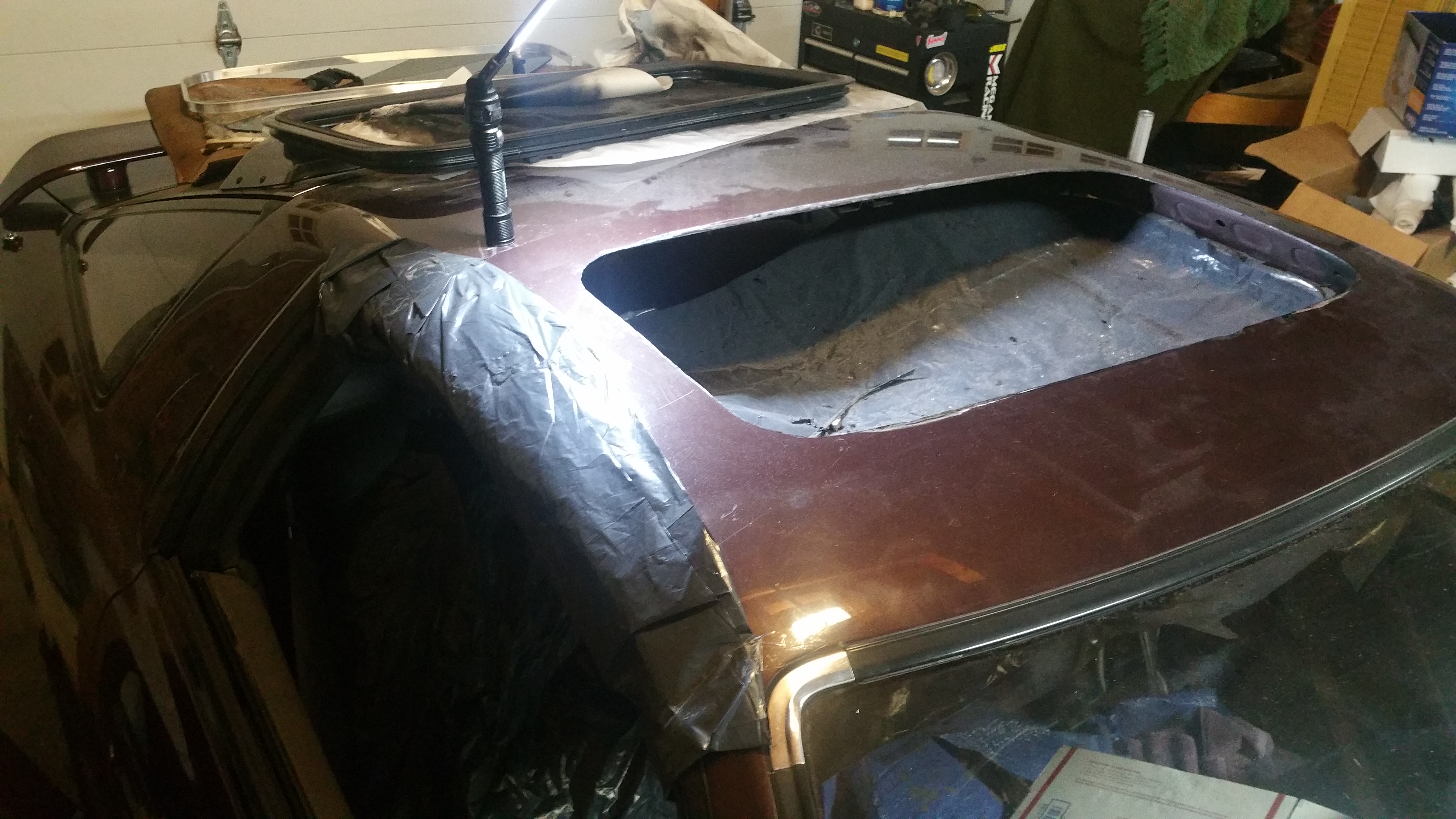 Testing the new sunroof shell for a perfect fit: 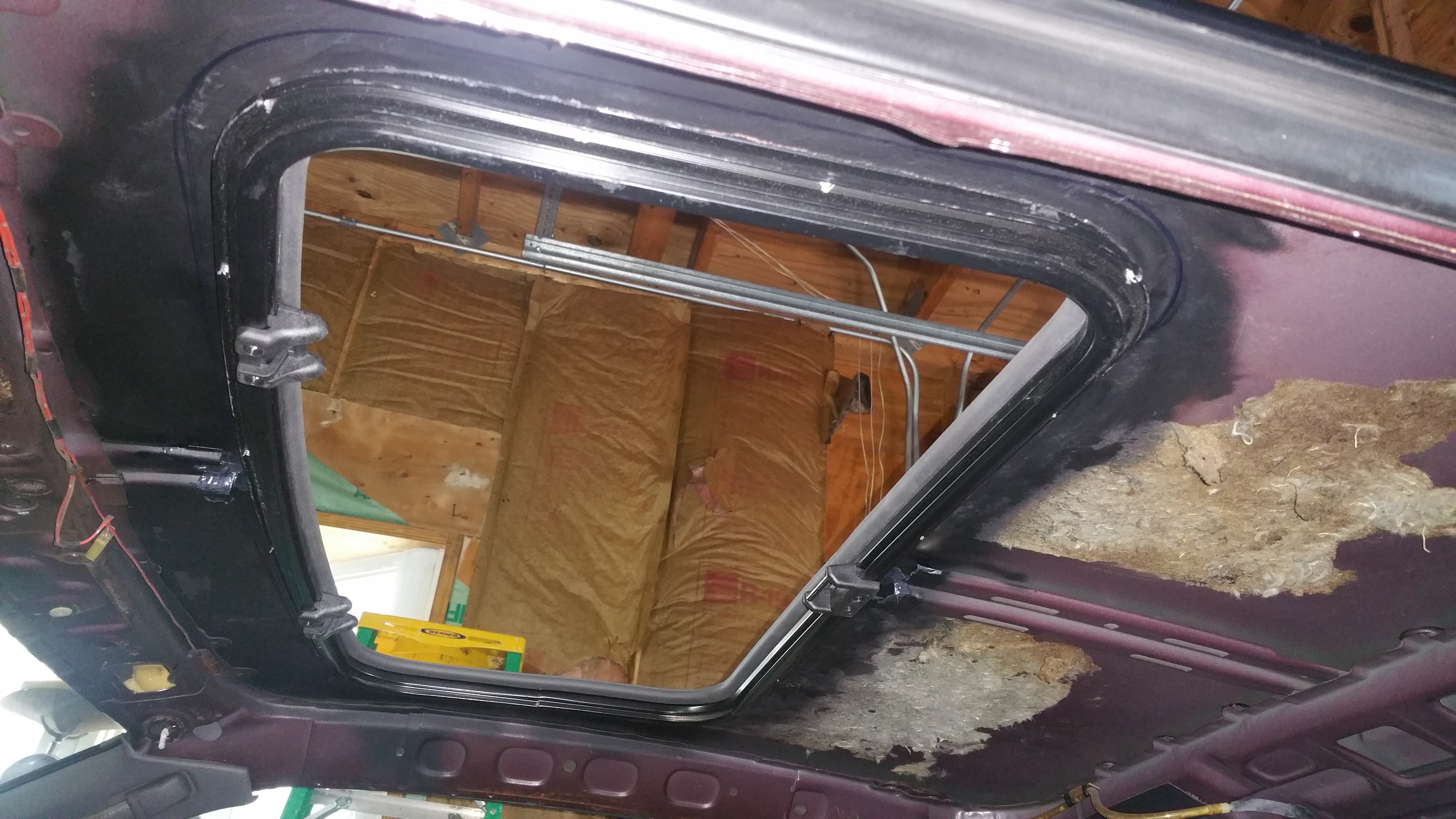 After everything was cut perfect and test fitted, it was time to seal it all up right with some silicone on the shell and tighten down the screws: 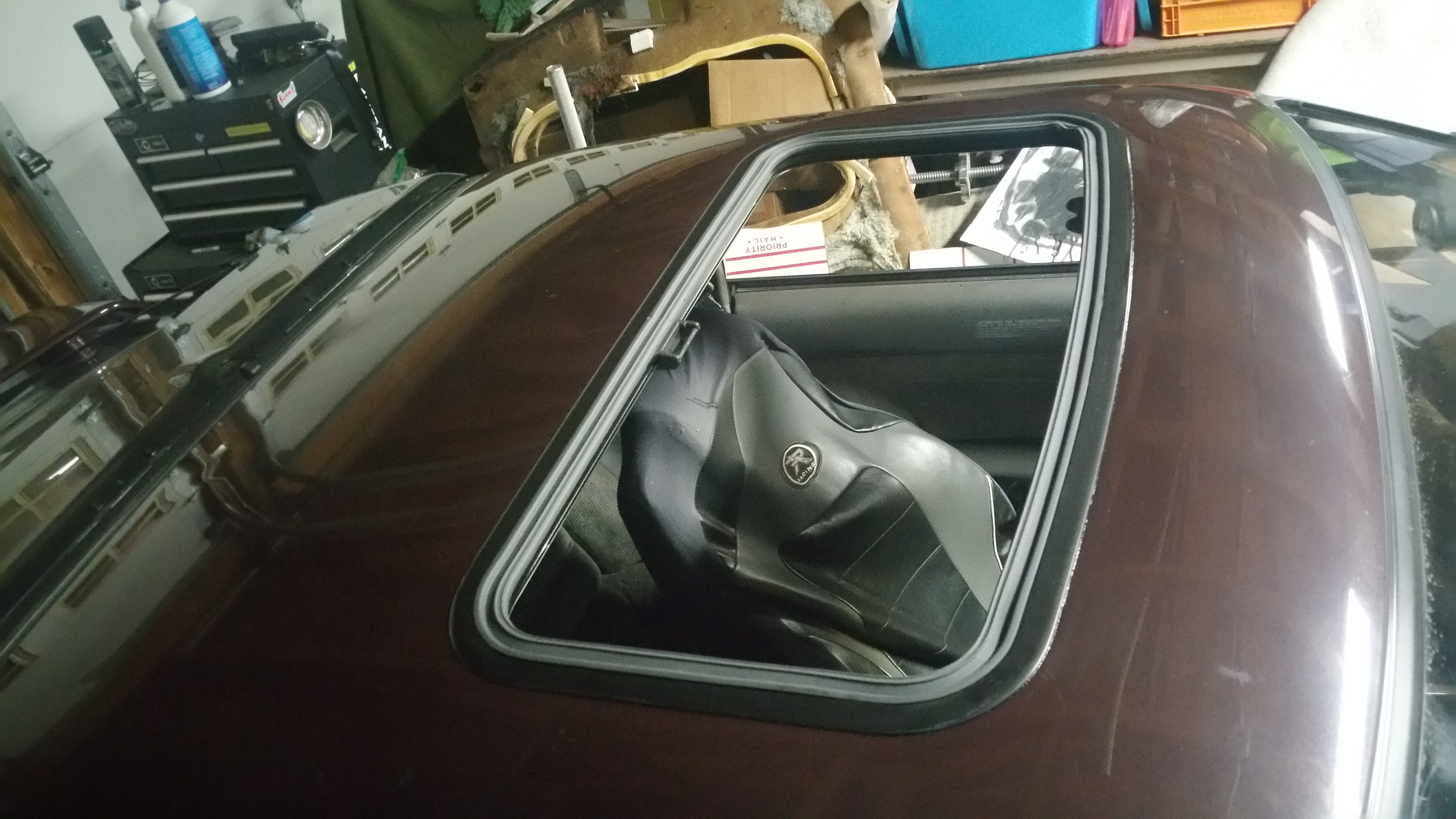 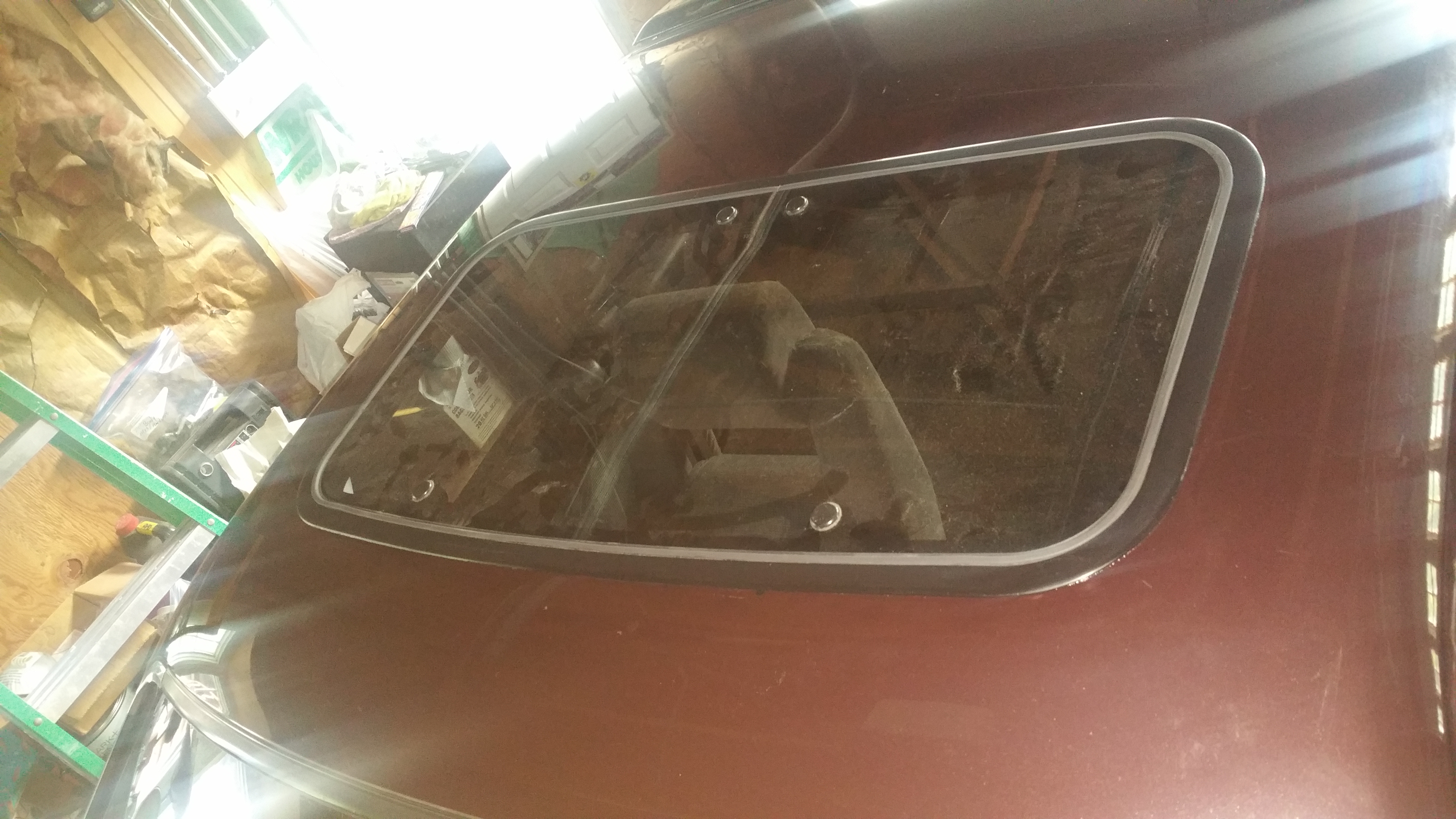 So is it just a manual pop-up style? I had one like that on my first car, it was great. Removable glass panel too? Great compromise compared to a targa car.
Reactions: plaaya69

Enraged said:
So is it just a manual pop-up style? I had one like that on my first car, it was great. Removable glass panel too? Great compromise compared to a targa car.
Click to expand...

Yes it is a pop-up style with 2 venting positions but you also can remove the glass within seconds by undoing the 3 latches it has and throw it in the back. Personally I would have preferred a plan hardtop but a sunroof is very nice to have when installed right.


Finished up the headliner install. Picked up a tan headliner from a local junkyard hardtop Supra and painted it black. Got the right cuts done and used some U shaped trim around it for a clean install. 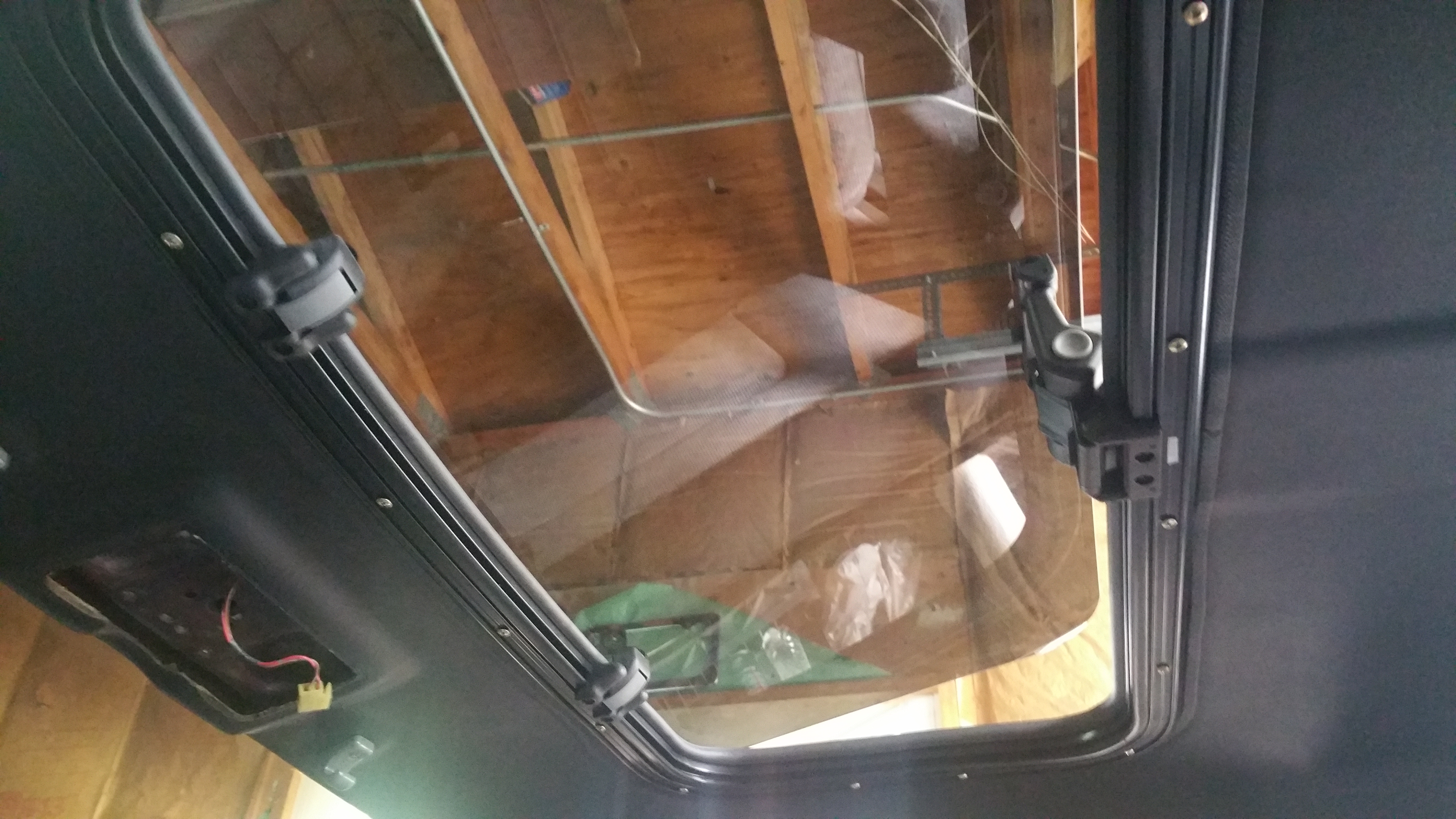 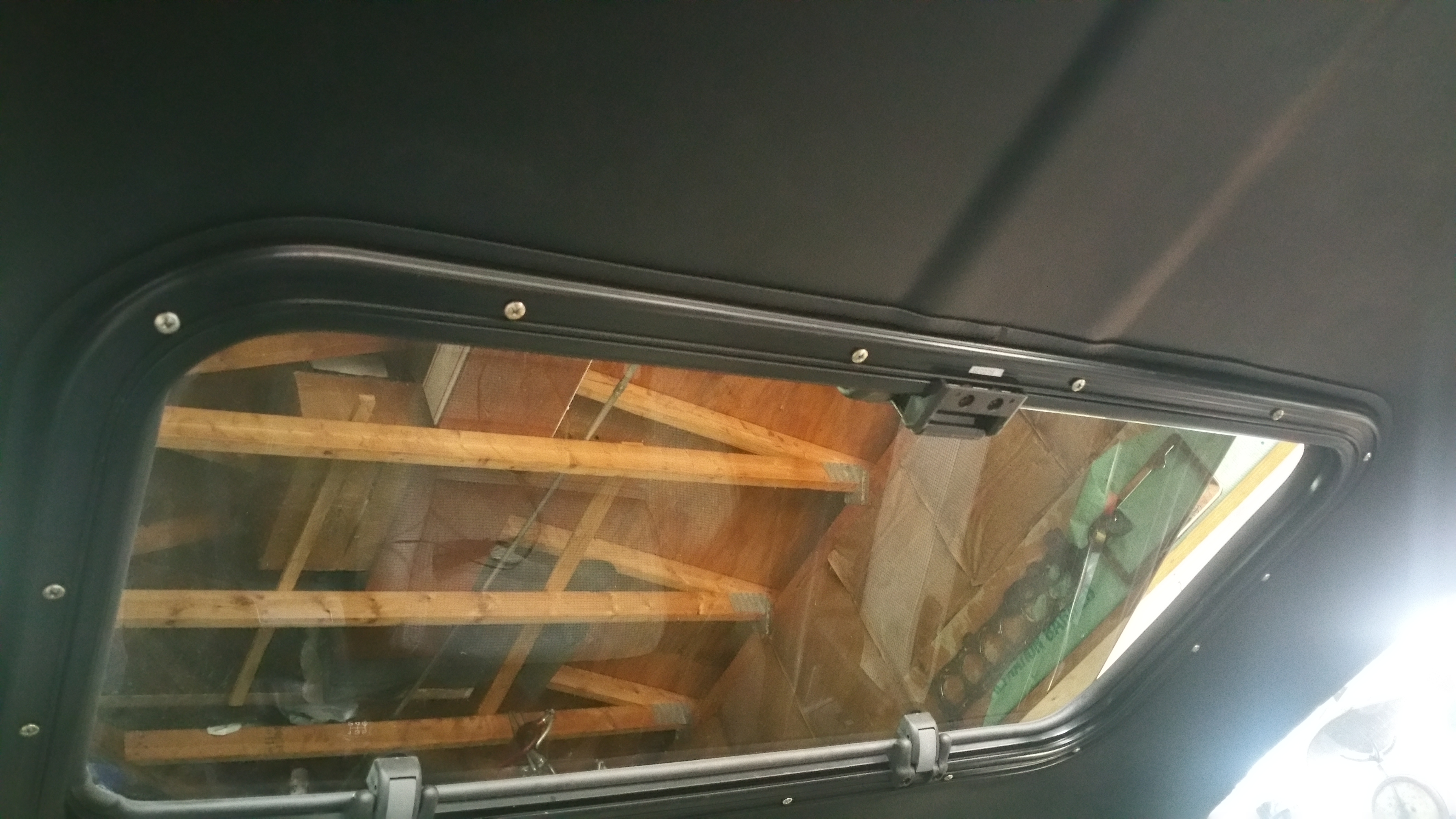 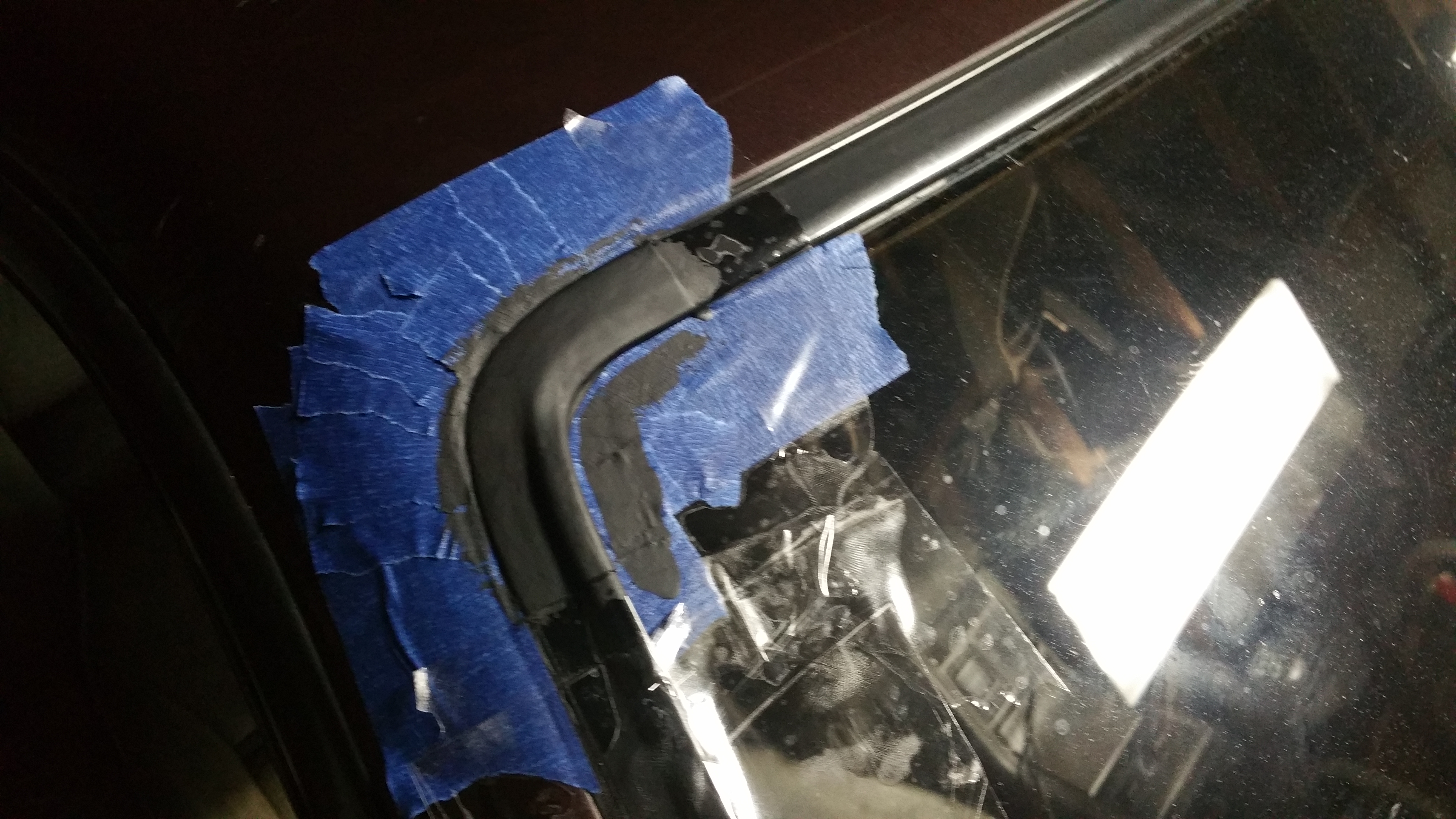 Now I want to add one to my spare targa top.
Reactions: plaaya69

Now I want to add one to my spare targa top.
Click to expand...

That would be very cool to see that done as I never seen that before. This is the link where I bought my 17"x32" pop-up sunroof:

Get the best deals on Performance/Custom Car & Truck Sunroofs, Hard Sunroofs Tops when you shop the largest online selection at eBay.com. Free shipping on many items | Browse your favorite brands | affordable prices.
www.ebay.com

This was the trim used around the headliner: 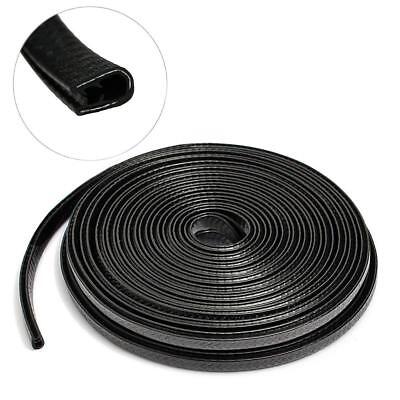 Its flexibility makes it easy to cut and can wrap easily any door edges. 3M Car Door Trim Edge Protector. CAR PROTECTOR. Trim & Mouldings. We hope you are satisfied with the item and our service. All products are covered by our warranty against defects.
www.ebay.com