I think lot of us have the same experience with the steering feel of the mk3, or at least this is what i suspect. The steering feel can be vague at the center, transtitions are not sharp and placing the car in corners is not easy at times.

Solutions to counter the sloppy steering are mostly about, steering rack bushings, tie rods inner/outer. Ball joints or worn out steering rack. But what if you have done all this and the steering is still not where you want it. It has been covered but not as much as it should, the steering column itself.

Before contemplating other steering racks or E-columns, i would suggest to check this first.

There is a rubberized connection between the firewall and the steering rack. This piece collapses during a collision and controls NVH. Not to long go i (finally) found the column on my supra to have more movement (not play) than i expected. It started out with the inspection of the universal joint, which had some play but not something you would notice. The movement of the rubber however translates in total of 20mm of vagueness left to right on the steering wheel. Compared with modern cars this is ridiculess.

Ok , I sourced another one, two actually and luckily i found one with only total of 5mm steering movement under load, seems like factory spec, only some play on the joint. The second one sourced was just as bad as the one installed initially.
I had also sourced a lexus steering column and used the joint to repair the mk3 one, even the mk3 seals can be put in place when cut to size. This is a major difference in steering feel. The car comes alive and placement and steady state cornering is much easier now. Feels like on rails!

But, i still had the lexus part, this design is different and has the same purposes as the mk3 column, so collapses and NVH control. But now with a spline design and sprung inside to allow some NVH control. This would even tigten up the steering even further. So this was sometning to build aswell, i had the parts already. I have not installed it yet because the one installed now is pretty good. I will install it when come around doing it and i have to see if i like the feel, but i am optimistic about the idea.

Hope this helps others to get their supra steer as it should. The sloppyness is not something which supposed to be, it is wear and tear.

This is a clip of the movement;

I like it.
Nice work, retaining the OEM collapsible section.
What Lexus did you pull that from?

I'd be interested to find another Toyota that used the same upper spline design.
Our steering shafts are pretty expensive, curious if there is another vehicle that could steal parts from.

I would start with the Toyota Trucks, seems like there was a LOT of parts used on both the Supra and the Toyota trucks of that time.

Yes, found the same in my search. I would look at all kind of 90`s Toyota's, since this was the basic design in those days it seems. Now i used the mk3 sourced part and took the upper part and rubber boot. Toyota trucks and 4x4 would be a source too, probably cheaper from a breakers yard.

The mk3 column is discontinued....

The lexus part was from a CT200. But i think the US Corolla uses the same type. You need to make to lenght anyway.
The rubber boot is still avaiable new., this is also mk3 and a number of other models.

What i might consider as a possible downside is the 250g extra weight for this hybrid part, this might affect steering feel in some ways.

One more thing is that i slotted both ends inside the connecting bush, so if the welds fail (unlikely) then still there is a connection. Also the the bush is (simple) calcutated to have about the same or more strenght as the top spline. Preheated to 50C beforee welding.
Last edited: May 16, 2020
Reactions: figgie

Sounds like you did everything correctly to me!
I might do the same thing and make one of these hybrid intermediate shafts.
I can't stand the dead on center steering feel.

This is a great post. Does replacing the rubber boot restore the performance?

I need to see if mine has the same problem, because there was a major part revision after 08/90 that may reflect some of the improvements in the modern equivalents.

For builds 08/1990 - 05/1993 they switched to 45260-14340 which was about 30% cheaper . With the relaease of the Lexus brand and the harmonization of alot of parts across the company in the 89-90 timeframe there were a lot of changes to the the supra to reduce costs. Its why the camry fluidic washer nozzles only fit the the 89+ hoods for example.

3p141592654 said:
This is a great post. Does replacing the rubber boot restore the performance?

I need to see if mine has the same problem, because there was a major part revision after 08/90 that may reflect some of the improvements in the modern equivalents.
Click to expand...

The rubber boot does not restore any performance, only to protect against the elements. There are no real changes between model years, perhaps the shore used for the rubber?. And all are discontinued. The modern Toyota/lexus design uses a spline instead of rubber interference.

Piratetip said:
Sounds like you did everything correctly to me!
I might do the same thing and make one of these hybrid intermediate shafts.
I can't stand the dead on center steering feel.
Click to expand...

The only movement will be from the torsion bar inside the valve assembly of the steering rack. This is compensated by the hydraulic pressure (separate chamber regulated by the pps solenoid).

I have installed a unit that allows me to change the ramping of the PPS assist by modifying the speed signal. This way you can fine tune further and be at minimum assist at lower speeds. From what i found ‘0’ assist is at 180km/h from factory
E

Nice! That level of fabrication is way beyond my skill or equipment, but maybe someone will offer this some time in the future..

I like this idea so much that I just bought an old shaft and new shaft to hack and weld as well.
Looking forward to removing more of the steering slop!
Reactions: Dave 1jz

So the old shaft I just picked up is incredibly tight.
I can't even pull it out of the slip joint.
No freeplay whatsoever.

Might take the one off my car and swap this one over in the meantime.

Then take the new style shaft and modify that later.

Wasn't expecting that at all.
Might have gotten lucky and found one in really good condition. 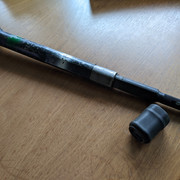 Great! Same with the one i have. You will be able to move it with a spanner and the joint in a vice. Like i did in the video. It looks like thr one you have has slid out about 10mm. Total lenght should be 405mm to 410mm. In the vice you can get it back to lenght. Makes it easier to install aswell, slide it fully in at the bulkhead joint and then slide down on the rack spline.

Yesterday i actually installed the hybrid one, i did have to modify the lower yoke a little, the bolt is recessed deeper and just touches the groove of the steering spline shaft. I driled out the non-thread side from 8.6mm to 9mm and sanded down the thread of the bolt from 7,95mm to 7,65mm. At that point i could fit the bolt and tighten to 32Nm. (Also the yoke needs to be fully seated on the steering box).

At lower speeds there is not much difference to the OEM good one. PPS is giving less pressure on the torsion bar, so this is normal. At higher speeds about 100/120km/h you feel the difference. It becomes very sharp. Usually going over bumps in high speeds corners needed some kind of steering compensations, this is now completely gone and the car follows the set steering angle more precise. I can really feel what the front tires are doing now.

I do have to add, i did modify the PPS signal, so i get a higher pressure at lower speeds. Anyway a good steering column will fix about 75% of the issue. The hybrid one will add 25% more, certainly at higher cornering speeds. In other situations i did not notice any difference, which is a good thing imo, im not waiting for more NVH.
Last edited: May 19, 2020