I just tried to get my camber done and the shop said it was impossible to lean the front wheels in more that 14 minutes. That isnt even 0.1 degrees.
So I wonder if that has got to do with my ride height. If some of you remember, I made my own front spring insulator and its thicker so I now have higher front ride height. My questions is, can a higher ride height cause the camber to lean outwards. Can I solve my problem by lowering the springs by 20mm, because If I understood correctly the lower you go the more the camber leans in, based on such statements

Lowering does typically induce more camber yes, but at OEM ride height you should still be able to go to 1 degree negative camber. For street this is enough, just max caster to 8 degree and happy cornering.

Lowering does typically induce more camber yes, but at OEM ride height you should still be able to go to 1 degree negative camber. For street this is enough, just max caster to 8 degree and happy cornering.
Click to expand...

My question, is what if I had higher ride height than stock, will it cause the inability to camber in ? Also, what other factors could cause the inability to add more neg camber ? Could it be the dude turned the cams in the wrong direction. I never seen it go to +. I mean if he tried to run in other direction there should have been some change.

Are you sure the camber bolts are not seized inside the bushes?

Dave 1jz said:
Are you sure the camber bolts are not seized inside the bushes?
Click to expand...

The bolts are not rusted. Should i try to remove the bolts and check ?
I looked at the design of a spare bolt and i noticed that it wasnt eccentric. Whats eccentric was the thick washer with one hole on top with markings. So my guess is the whole bolt turns around inside the subframe while pivoting on the thick cam washer..and when tightened down its supposed to stay there. I need to remove a bolt and look at the subframe to understand the system. It really looks like i have not enough front camber.

You could try moving to some adjustable upper control arms. 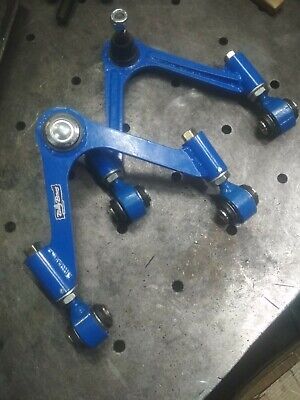 Get it back on the lift and remove the nut and cam washer of the front lower arm bush. Then check where the bolt is in the subframe slot. Then you know exactly what is going on and if you can set more camber.

No other impact damage or anything, L+ R show the same issue?

Dave 1jz said:
Get it back on the lift and remove the nut and cam washer of the front lower arm bush. Then check where the bolt is in the subframe slot. Then you know exactly what is going on and if you can set more camber.

No other impact damage or anything, L+ R show the same issue?
Click to expand...

Thanks, but looks like I have to do it myself at home . I will mark the positions first of course. I will get some thick wooden blocks ready so I can put the car tyres on top the blocks to lift the car up. I need to find a way to be able to give the front tyres a little bit of slip abilty like the slip plates in the shop. Yes L and R are the same. I just think these idiots dont know what they are doing. Might make a video too.
I just realized I was quoting seconds as minutes...
Last edited: May 16, 2020

I inspected the tabs, and subframe, they look good with no rust. Pics of front left lower bolts.

To those of you who knows these parts very well, is there anything wrong you can spot? Are these in the correct positions? Are they at the end of their adjustment ranges ?
Ok here is the lowdown of what happened. I jacked the car up, removed the wheel, marked the bolt positions. Tried to loosen the bolts, realized I needed a 24mm socket. Goes to hardware store to get it. Come back, tried to loosen the nut. Wont budge, so i figured I needed to jack up higher, so that i can extend the end of the socket arm and gain more leverage. Jack will not go higher, realized that the jack has failed and leaks oil. So ends my quest to remove the bolts and reposition.
Anyway I also noticed something odd. When i jacked up the arm (simulating suspension compression from the tyres), the arm will not go up more than ride height level. What happens instead is the whole car gets pushed up, as if the spring/shocks wont allow more upwards travel. Removing the wheel and no jack under the arm the arm is able to extend downwards. So I have full downwards extension till ride height level. Is this normal , is there binding somewhere ?
Pic below is the tyres at current setting. It looks ok, but you can see that the outer edges has white smudge and the inner is clean. Also when I remove the tyre and try to let the wheel stand on its own, it falls towards the outside, like the outer tread has worn down more than inside.
I am puzzled why I cant get a bit more camber, when everyone says its possible to get up to -2. Now I cant even get -.0.5.

So my plan for the coming week is to get a proper hydraulic jack and try again the next week, or take it to a better shop that is willing to remove the bolt and inspect.

Putting the jack under arm gives a way different motion ratio, to check the movement you need to remove the coilover. But OEM bushes have preload on them aswell. I would suggest you to go to an alignment shop who also deal with rally or other sports cars. They will be able to sort is out.

One bit of info the front bush of the lower arm is for the camber, the aft one for caster, they do influence each other a litlle bit. The firts two pictures show the cams dead in the middle, so plenty left to adjust.
Reactions: alcyon and debrucer

Dave 1jz said:
One bit of info the front bush of the lower arm is for the camber, the aft one for caster, they do influence each other a litlle bit. The firts two pictures show the cams dead in the middle, so plenty left to adjust.
Click to expand...

Thanks. I just wanna check by myself that the camber bolts are not seized inside, maybe, just maybe its seized inside so it cant turn. Once I confirm that and if its possible to push the arm all the way out with the cam bolt, then i will take it for alignment.
It seems like asking these shops to check for these is too much work for them.

Guys, is it ok to grease the cam bolt where it goes into the arm bushing, and the cam washer where it touches the tabs on the subframe ?

You could use some grease on the shaft of the bolt to prevent corrosion to the bush. Otherwise no grease is needed. Make sure you loosen the bolt/nut enough to enable to move in the subframe. The OEM bushes are toothed and dig into the subframe a little.

Also use new M16 washers before torqing to spec. The torque is quit high on the forward lca.
Reactions: alcyon

Put anti-seize on it.

I managed to remove both bolts on the left side today, found that the bots aren't seized, and indeed the arms cannot move any more outwards on the left arm, but on the right there is plenty of adjustment left. I also stuplidly bent the inner, inner camber tab, i bent it back, but when I adjust the arm to full neg camber the tab bends again, seems like that is really the end of the slot, or the tab has weakened. I plan to adjust the camber bolt somewhere in the middle, bend back the tab, then weld a square bar behind, then I will re adjust the camber on the left wheel again.
Below pic shows left wheel camber nut from the front. The adjustment is already to the max, to the outside. The inner tab on the bolt head on the other side, not pictured, has bent. Everytime i try to go even more the tab bends outwards, but it does seem to be at max position.

Below pic shows camber nut of right arm. as you can see, the bolt is still far from max adjustment, which is to the left. So the left and right adjustment is not equal.

My mistake with these was the outer diameter was too big causing it to touch the bends on the sides of the upper mounts, making the rubber unable to compress, this looks waay too thick. I plan to make a new thinner rubber piece and smaller diameter so the sides will not touch the bend tabs on the upper mount. Hopefully this will bring the ride height back to the correct level, and hopefully solve my problem.

I will report back once i get new insulators made up.